Trump announced the tariffs after hearing from executives of companies that will be protected. “Cronyist” is a better word for this kind of economic policy than “nationalist.”

But while protectionism tends to promote corruption, a desire to please the CEOs of steel and aluminum companies is almost certainly not what is driving the Trump administration’s trade policy. What’s driving it, rather, is a set of ideas about trade that Trump and some of his advisers have long held.

Many of them genuinely think that trade deficits are dangerous, that free-trade deals have hurt our economy, and so on. These ideas are, unfortunately, bad ones, and there’s no good argument for the policy that is resulting -- which is why we are hearing such confused defenses of Trump’s planned tariffs.

Steel's difficulties? Self-inflicted, notes Stephen Mihm.  "Unfair trade practices of foreign nations had nothing to do with it."

It sounds like Mr Mihm started with the 1966 "Big Steel, Invention, and Innovation" by Walter Adams and Joel Dirlam in Quarterly Journal of Economics.


Instead, the blame lies with U.S. manufacturers who held onto the so-called “open hearth” method of steel production decades after its expiration date.

Europeans, though, had no such attachment to the past, perhaps because many factories had been destroyed in the war. Moreover, they had started experimenting with the idea of turning iron into steel by blasting pure oxygen onto the molten metal. This method, which became known as the basic-oxygen process, first entered trial use in 1948 at a factory in Linz, Austria, owned by the small steel firm VOEST. The company soon built a full-scale commercial facility that went online in 1952.

Linz became something of an industrial mecca in the succeeding years, as steelmakers the world over visited to see this new process firsthand. Most became immediate converts, and with good reason: The cost of building steel mills using the basic-oxygen furnaces was 40 to 50 percent lower than conventional open-hearth factories; operating costs were 25 percent lower, though some studies suggested even greater cost savings.

But it was the productivity gains associated with the new process that should have really raised eyebrows. One factory that made the shift could produce 40 tons of steel per hour using the open-hearth process, but after installing basic-oxygen equipment, it managed to quadruple that figure.

Unfortunately, Big Steel was too proud to notice Europe gaining ground. In a typical advertisement from the era, U.S. Steel claimed it was a company “where the big idea is innovation.” But this claim -- much like so many of the braggadocios claims of today -- could not hide a more disturbing reality.

That's partially true, although those early basic oxygen furnaces were small, and their faster production rate still couldn't match the tonnage of the largest open hearths of the American High, such as these at Homestead, Pennsylvania. 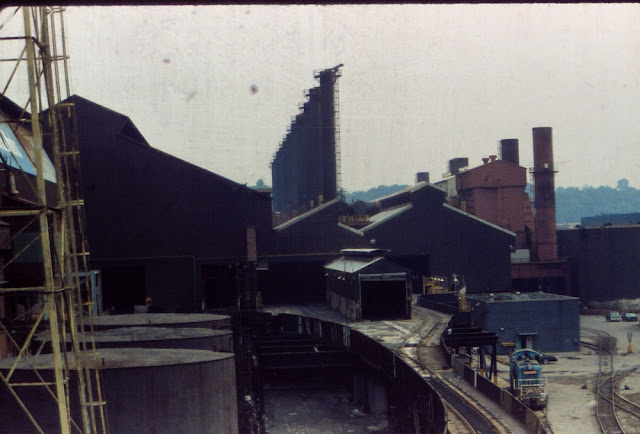 I really should locate and scan the picture I took of McLouth's pioneer basic oxygen furnace, in Trenton, Michigan, which was serving as a big flower pot near the mill's offices.

Further confounding the steel companies' troubles was a different method of upgrading.


While Big Steel fiddled, basic-oxygen furnaces burned ever brighter around the world. So, too, did yet another method of making steel that was even more revolutionary: the electric-arc method. This technique used electricity to recycle iron scrap, turning it into steel. Unlike conventional steel mills, electric arc mills are small-scale enterprises that are easy to establish and cheap to build, even if they can’t produce anywhere near the scale of a conventional integrated mill.

The Europeans began building these, too, en masse. As these two methods continued to take off in Europe, and then in Japan and elsewhere in Asia, American companies continued to add completely inefficient open-hearth furnaces to their shop floors, doubling down on an obsolescent technology.

By the 1960s, Big Steel began building basic-oxygen plants, grudgingly. It was too late. The steel industry had squandered its supremacy.

First, electric arc furnaces of large capacity were available and operating in the United States, including three behemoths of four hundred tons per heat on a three hour cycle at Northwestern Steel and Wire in Sterling, Illinois, and at a number of independent steel producers in the United States.  As I remarked to colleagues back in the day, the steel business struck me as a "lively corpse," and this wasn't just Nucor.

Second, Big Steel, particularly the smaller integrated companies, might have actually been building too small basic-oxygen plants, too soon.


The most intriguing implication of this research is that the "lethargic" steel producers who postponed the replacement of their open-hearth furnaces or only recently replaced them with large electric furnaces made an optimal choice. Early adoption of a (too small) basic oxygen converter may have been a mistake.

Read all about it here, might require registration with J-Stor.

Third, those installations of large electric arc furnaces, either within integrated mills, or at entirely new locations, might not have worked out, as minimill technology with Big Steel labor relations doesn't always turn out well.

More recently, those minimill technologies might have proven more disruptive of Big Steel than all the open-hearths of Magnitogorsk.  Back to Mr Mihm.


But there’s a final twist to this tale that highlights the absurdity of Trump’s strategy. In the 1960s, a man named Ken Iverson took over a conglomerate that acquired a stake in the steel business that became Nucor. Iverson then bet the firm’s future on making steel using the electric arc process, building the first American facility in 1969. It began growing at an exponential rate, competing rather effectively with foreign producers, to say nothing of other American producers.

As other steel producers begged for protectionist trade policy, Iverson mocked the idea. In an interview in 1986, Iverson noted that protectionist measures already instituted hadn’t had the desired effect. “As soon as prices began to rise so that the steel companies began to be profitable, they stopped modernizing,” he said. “It's only under intense competitive pressure -- both internally from the mini-mills, and externally from the Japanese and the Koreans -- that the big steel companies have been forced to modernize.”

Nucor has since become the nation’s largest domestic steel producer. Yet it has started to act like the U.S. Steel of old. After Trump announced the tariff, Nucor’s CEO vigorously applauded the move, claiming it was long overdue.

We’ll see. But before Nucor joins the protectionist parade, it might want to recall the words of Iverson, who died in 2002, when his company was on the way to the top: “Unless you’re under intense competitive pressure and it becomes a question of the survival of the business to do it, you’re just going to lapse back into your old ways. There’s no other answer.”

We've noted Nucor's change of attitude.  Maybe it's time for more serious thinking about disruptive inventions and punctuated disequilbrium in steel.
Posted by Stephen Karlson at 17:23