SETTLING FOR THE MINIMUM CONTRACT?

Today's not-to-be-regular Saturday bridge column (the last one running early in August) illustrates the value of understanding the bidding conventions one's partner (and one's opponents) are using.  It's another screen capture from the simulation, with the North bot responding to my One Club opening. 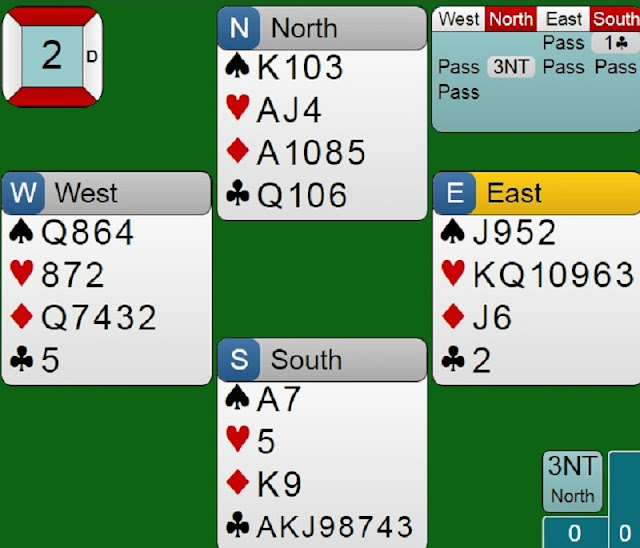 Perhaps that's an instance of mauering, there's a reason the bridge teachers and their books devote so much time to the art of the bid.  With a human partner and some shared knowledge, perhaps we would have gone 1♣ : 3NT : 4♣ (let's hope that's enough to determine the suit) : 4NT (asking for aces): 5♥ (noting two) and perhaps we get to 6♣ or 6NT.  Or perhaps not.  If the partner bot has all the other aces, 5NT asks for Kings, which means that after 6♦, showing two, we're probably in 6NT.

Because the North hand first selected No Trump, the opening lead of the ♥K (almost top of a sequence) comes from East.  Clearly, if West had the Ace, the defense runs sufficient Hearts to set any slam contract.

In one of the hypothetical Club contracts, I'm not sure what the West lead would have been.  Not that it matters.  Count the winners in North's hand: two Spades, one Heart, two Diamonds, three Clubs and down one, although with eleven Clubs to work with, once the Club suit is established (after at most two leads) there are plenty of resources to discard all those other losers.  Note how conveniently all the long holdings other than Clubs are in North's hand.

So it went: take the ♥A, cash the high Spades and Diamonds, finishing, because one way to develop the habit of leading from low to high is to do it even when the outcome is forced, with the ♦9 on the board to the ♦A, followed by the ♣10 to clean out the low Clubs, the ♣Q to the Four on the board, to unblock the suit (there is nothing so frustrating as having a string of high cards and no way to get to them) and the Six to the Jack on the board, and then cash the rest of them (or one could hit the "Claim" button on the simulation at this juncture to reel in the final five tricks.)
Posted by Stephen Karlson at 12:22