REPEAL BY DEFAULT. The House, Senate, and President Obama have a medical insurance reform bill that appears close to becoming law. Republicans are making hopeful noises about repealing some of the provisions. But major public entitlements, once in place, are difficult to repeal as their beneficiaries become constituents for its preservation.

That's not to say entitlements can't be undone. 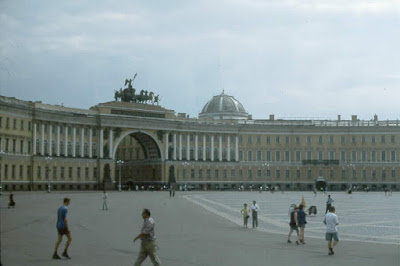 St. Petersburg, July 1997.
Bolsheviks only stormed through that arch in the movies. But behind the walls is an instructive lesson. No, not the Hermitage art galleries, in which the Tsar's collection of impressionist works was Khrushchev's degenerate art. Not the stonework in those galleries, which might be artistically more significant than the paintings. Rather, it's the elderly ladies serving as security in each gallery. At the time of my visit, Russia was in depression, with one third of the Yaroslavl working class officially listed as unemployed, accompanied by a hyperinflation in which a half-liter bottle of Pepsi went for several thousand rubles. Metal kopecks, let alone one- or five-ruble notes, didn't exist. Those ladies were receiving a paycheck to supplement defined-benefit pensions of a few hundred rubles a month.

With Social Security administrators selling the Treasury bills it holds as trust fund assets into a weakening market for Treasuries and Walgreens declining further Medicare patients, the issue is not necessarily one of repeal.
Posted by Stephen Karlson at 22:59