MEMOS AND PIPES. A colleague reminded me that legendary basketball coach Al McGuire (the other Wisconsin-based coach to win an NCAA title in March 1977) used that term to refer to administrators and professors. (And what does it say about the current professoriate so cravenly caving to the fanatics that eventually made entire college towns into no-smoking sections? But I digress.)

It's rather the Munger Conjecture on the proliferation of McAdministration in state universities that I wish to address. 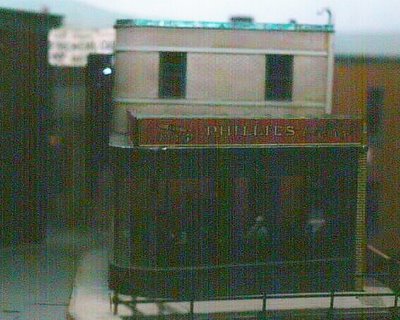 Edward Hopper's Nighthawks in O Scale.
The research staff at the Center for College Affordability and Productivity (I'm still not sure whether this is two guys at a smoke-filled Internet cafe, or a second-floor rented office above an all-night beanery with a good view of the drop forge across the railroad tracks) have done a preliminary pass through some college payroll statistics.

We took the total amount of money spent on professor salaries and divided it by the stated tuition at three rather different type schools. We calculated the average of this statistic for the eight Ivy League schools, the elite private schools that are widely acknowledged to be amongst the best in America. We did the same for the 11 public schools in the Big Ten athletic conference, a group of high quality flagship state universities. Finally, we did the same for the dozen schools belonging to the Mid-American athletic conference, a group of medium-sized and generally perceived to be medium-quality state institutions with somewhat less of a research emphasis than the Big Ten schools.

This is the same kind of imprecisely-specified number-crunching that so frustrated me in Going Broke By Degree. Is the numerator faculty salaries? Instructional payroll? Something else? Is the denominator full-fare tuition multiplied by enrollment? Reported tuition receipts?

Now consider the effects of the disaggregation.

In the Ivy League, professorial costs were on average less than 20 percent of stated tuition levels. In the Big Ten, the figure was much higher, close to 70 percent, whereas the Mid-American conference schools average was somewhat below 50 percent. Moreover, these statistics were calculated including graduate and professional students in the enrollment figures. These students absorb a relatively higher portion of faculty resources than undergraduates, suggesting our little ratio may overstate faculty salaries of those actually teaching undergraduates as a percent of tuition.

Or that the Ivies report compensation differently or rely more heavily on adjunct faculty not accounted for in the line item called "salaries and wages, tenured and tenure-track faculty?" Or that "actually teaching undergraduates" is as complete a job description for the professor as "actually preaching sermons" is for the parson? Or that there's a demand side, and the positional arms race among ambitious parents bids up posted tuitions at the Ivies but the administrations have resisted temptations to enroll as many students as Ohio State, creating more competition for professors?

Not upstairs over the beanery:

Assume that universities need facilities and support personnel that cost as much as faculty costs in order to permit instruction. Call that the 100 percent overhead cost assumption. Ignore the overstatement of salaries bias mentioned in the previous paragraph. Then at the average Ivy League school stated tuition rates are well over twice as great as the actual cost of educating students.

It's rivet-counting to ask whether the brain coach for the Harvard hockey team (it's quite good) belongs in that allocation or not, but the allocation is arbitrary.

These schools make a massive profit off undergraduates that is used to subsidize other activities (and also pay themselves handsomely; counting fringe benefits, the average total compensation of a full professor at Harvard now approximates $200,000 a year).

Couldn't the numbers be used equally well to argue that Harvard's senior professors are exploited: there's a heck of a lot of surplus value being accumulated by somebody (or dissipated in rent seeking?) Those other activities? Distinguish the above calculation from a calculation that the local Baptist congregation is paying the equivalent of $20,000 an hour to hold church on Sunday, with the building mostly idle the rest of the week while the pastor is calling on the sick or protesting injustices.

Closer to home, after a few strong coffees they come up with this.

In the Mid-America conference schools, professor salaries, even with 100 percent overhead costs, on average are slighly less than tuition. For undergraduate students, these schools may well make a modest surplus. State government subsdies do not appear to support undergraduate instruction. Again, the question is: why do taxpayers permit this to happen?

But suppose the Mid-American universities rely more heavily on non-tenure-track faculty not included in the numerator, and devote more resources to retention and remediation, undertaken by individuals who may not do any teaching at all? To return to the Munger Conjecture: is the alleged lack of productivity in higher education attributable to the proliferation of support staff and McAdministrators who neither teach nor do research?

When the researchers finished their coffees, they promised more.

To be sure, there are a lot of qualifications to this analysis that we are not discussing here in this already over long blog. For example, "net tuition fees" (after scholarships) are lower than stated "sticker prices." More needs to be said. Therefore,watch for more on this topic in the days, weeks, and months ahead.

Some discussion of sources and methods in those forthcoming posts will help.
Posted by Stephen Karlson at 21:19