THE CONFEDERACY OF THE FRUSTRATED.

That's a line from an Evan Osnos essay in The New Yorker on the Donald Trump phenomenon.  There's some truth to it, and a number of perspectives on What It Means.

Sometimes it's simple.  Here's a flag sales tent at a Midwestern threshing bee. 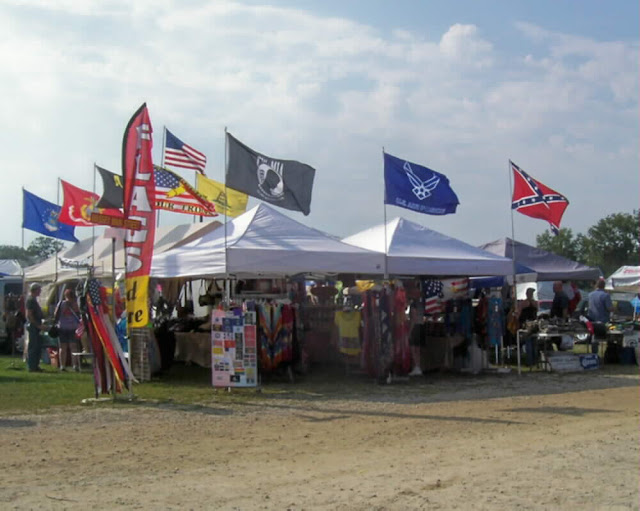 The more censorious the Perpetually Aggrieved become, and the more in-your-face the rainbow coalition is in the entertainment industry, the more Gadsden flags and POW-MIA flags and Confederate battle flags will sell.  Subverting the dominant paradigm and being transgressive isn't for the critical studies people only.

That theme is present in several essays, from differing perspectives, on the way Donald Trump seems to poll better the more transgressive he becomes.  First, there's Michael Tomasky, in (of course) The New York Review of (Each Other's) Books, telling the clerisy what they want to hear.


Is Trump not the logical culmination of where Republican politics have been headed for many years now, going back to the Clinton and Bush presidencies, but especially during the tenure of Barack Obama? Two qualities more than any others have driven conservatism in our time. The first is cultural and racial resentment, felt by the mostly older and very white population the GOP increasingly represents—resentment against a fast-changing, more openly sexual America, as well as against dark-skinned immigrants, and White House occupants, and gay people and political correctness and the “moocher class” and all the rest. The second is what we might call spectacle—the unrelenting push toward a rhetorical style ever more gladiatorial and ever more outraged (and outrageous), driven initially by talk-radio hosts like Rush Limbaugh and now reproduced on websites, podcasts, and Twitter feeds too numerous to mention. There is a strong tendency, perfected over the years by Fox News, to cover and discuss domestic politics as a combination of war, sport, and entertainment all at once.

Leave for another day that this "more openly sexual America" that on the one hand heaves up Madonna and Miley Cyrus and on the other hand laments the collegiate rabbit culture and views all men as potential rapists, except when that hurts enrollments, might not be good for anyone.  Let us save for another day that "pigs in a blanket" and "Obama's stash" don't elicit empathy.  Never mind that there have been polls, and focus groups, and Morale Conditioners, long before Fox News.

No, let us consider James Lewis at American Thinker, observing the same phenomenon.


But on Trump [conservative pundits] have forgotten their basic Edmund Burke. More successfully than anyone else, Donald Trump is tapping into a deep popular unease about the moral and intellectual sleaziness of the ruling Left. The Left has been turned the country into a daily freak show, with Obama and Hillary smashing the constitutional furniture just because they feel like it. They are a national disaster.

Worse than that, Alinskyites like Obama and Hillary are extremely dangerous, as Obama's surrender to a nuclear Iran shows. Historically American statesmen aim for stability: Obama opts for revolution -- like the "Arab Spring" that was supposed to bring the fascist Muslim Brotherhood to power in Egypt. Today, Obama is pulling another revolutionary move by flipping American support to the fanatical priests of Tehran. Nobody believes Obama's barefaced lies anymore, except the U.S. media and their mind-numbed voters.

In his "community agitator" fashion Obama has betrayed every U.S. ally whose defense depended on us, including the Saudis, Egypt, the Sunni Gulf states, and Israel. Libya was simply destroyed and its ruler executed.

Here's Ben Domenech of The Federalist, in a similar vein.


The two major party establishments are more or less complicit in this political and cultural invalidation of a large swath of the electorate. Couple that with the economic disaffection this same group already bears toward the elites already leaving them behind, and something like the Trump boomlet was probably inevitable. If a large – sorry, yuge – portion of the country wants existing bipartisan immigration laws to be enforced, and one party tells them “Yes,” but means “No,” and the other party tells them, “No” but means “You’re a racist,” then it’s only a matter of time before some disruptor is going to emerge to call them out for their game.

In so doing, that disruption might mean an increase in white nationalism (the pejorative term for identity politics not practiced by any part of the rainbow coalition), or, Reihan Salam hopes, in a rediscovery of assimilation into some emergent notion of what it means to be American.


Essentially, this view holds that America’s diverse groups can over time blend into a new “American” ethnicity. To get there, however, we’d have to moderately reduce immigration flows that both put economic pressure on immigrants who already live and work in the U.S. and that reinforce their ethnic ties to their ancestral homelands. Whether this view will prevail is very much in doubt. Anti-immigration rhetoric tends to frame high levels of immigration as a threat to natives, not as a barrier to integration, assimilation, and upward mobility for the tens of millions of immigrant families that have made their homes in the U.S. over the past several decades. There is no major politician I know of who is offering a robust case for the melting-pot ideal. And that is a shame.

I'll keep my eye on the flag-sales tents at county fairs and threshing bees all the same.
Posted by Stephen Karlson at 13:02