All this posting about Hiawatha steam speed records or not inspired me to take a mental health day riding a Hiawatha. Hey, the weekend pass is good for two days, and the stack of homeworks to be returned Monday will be the most travelled set of homeworks I've graded, with one Hiawatha, two commuter trains, three stations, a coffee house, and an airport Starbucks offering working space. 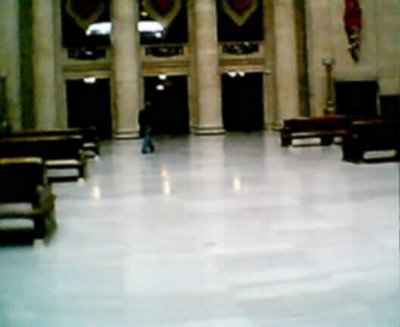 The waiting room has thus far avoided being "redeveloped" as an office tower or an apartment complex, and it stands in all its Pennsylvania Railroad grandeur. (It also serves as a gathering area for some Amtrak passengers as we shall see.)

The conductor of the 10.20 "Morning" Hiawatha (hey, the real Morning Hiawatha used to leave at 10.30) was a bit impatient on the radio. "C'mon, 'Casey,' let's highball!" (Name changed.) So when the conductor collected my ticket, I was in the mood for some teasing. "Could 'Casey' get us from Glenview to Milwaukee Airport in 45 minutes?" (No.) But at one time, such running would be possible. 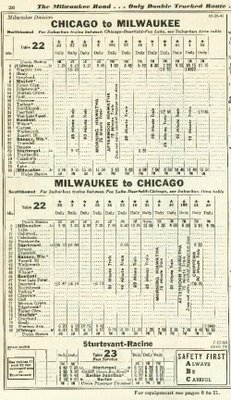 This schedule was in effect when Pearl Harbor was bombed. Trains are much faster, although today's service is better spaced throughout the day, with something resembling a memory pattern of two hour headways. Several of the services shown here continued to Green Bay, the Twin Cities, and the Pacific Coast. Note that the speed restrictions in effect today are bureaucratic constraints, not technological constraints. No automatic train stop, centralized traffic control, welded rail, or dead-man petals in 1941.

The northbound trip was fast and on time into the airport. Amtrak strengthened the formations with a business-class dinette car (hey, hire a cafe attendant and make that a regular feature.) There is work in progress at Highway 20 building what looks like a new Sturtevant-Racine station (what will happen to that funky witch's hat station at Sturtevant?) Lake Yard, and the interlocking tower that stood there until recently, are gone.

The weather isn't conducive to flying. 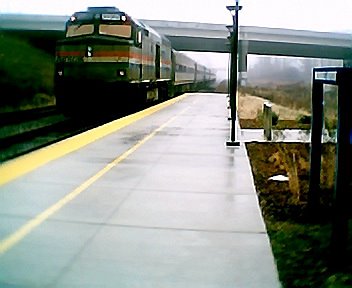 I'm not sure whether these posts are a security measure or simply recognition that some drivers will mistake any wide paved surface, including a sidewalk leading to a passenger platform, for a road. 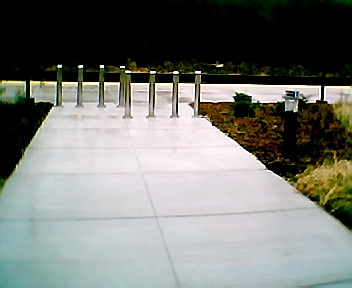 Let the record show that there was at one time a closer train stop to Mitchell International. 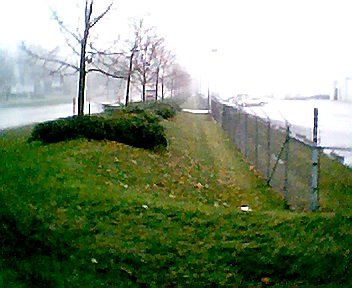 The line of trees marks the right-of-way of the North Shore Line, and the Milwaukee Division locals would make a flag stop at Grange Avenue, although whether any adventurous souls made an intermodal connection hiking into the airport from there may remain an eternal mystery.

Inside the airport, which offers a shuttle bus to the train station (and lots of air travelers were making connections today) this cluster of maps shows the weather and the current position of airplanes inbound to Milwaukee. The maps might have assuaged some people on this foggy day. 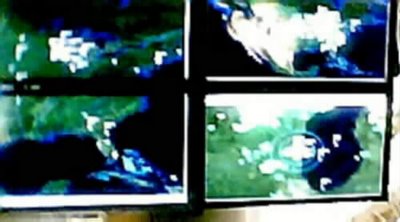 The southbound 3.0 Hiawatha was a few minutes late into Airport Station, probably delayed in Milwaukee receiving transfers from a late-running Empire Builder that blasted up Lake Hill just ahead of the corridor train. Once all the airport passengers were loaded, it was off to the races, with an on-time arrival in Chicago, and plenty of time to turn the train and get the northbound hordes away at 5.08. (That's WITH strict adherence to the 79 mph speed limit. Give them their head to 110, I say.) Other trains were also busy, with the State House and Pere Marquette strengthened but away on time, the Capitol Limited loaded and away on time, a long Illinois Zephyr into the station with little time to load and away on time (passengers requested to queue outside the departure lounge.) Only the Twilight Limited was delayed, account late arrival of the inbound equipment, and those passengers were requested to assemble in the Great Hall to be marched to their train when it was ready. But considering the crush of passengers and the limitations of the concourse, which was "redeveloped" in 1969 for commuters only, the late afternoon departures went quite smoothly. That also appeared to be the case on the suburban services, including the 6.40 to Elgin, which was also full of shoppers, holiday-makers, and a few transfers off of Amtrak.
Posted by Stephen Karlson at 21:24