Atlantic Blog points to two articles that convert the battle of the sexes into an intramural struggle among the women.

One, by Professor Linda Hirshman in The American Prospect, has sparked a great deal of conversation and commentary. Go here for several link-rich posts with active comments, here for more links as well as spirited commentary and comments, and here for a somewhat differing perspective including civil disagreement.

The other offers a somewhat more measured take on the idea that high-achieving women who become stay-at-home moms are somehow traitors to The Cause. (That idea has a rather dubious pedigree. A cherry-picked sample, specifically the wedding announcements of the New York Times, cannot be the basis of any serious social science, although it might provide what we call "stylized facts," which might be a polite way of saying "gross generalization," to begin some serious investigation.) On to the substance.


There is certainly more that can be done to facilitate those women who want, or need, to work and take care of children as well. There is also an onus on women in the workplace to do all they can to modify existing structures so as to facilitate those coming after them. But that is quite a leap from arguing, as Robinson does, that educated women have an obligation to disregard their own wishes in order to stay in the workplace and force these changes.

I'm going to go out on a limb here and suggest that educated women (and men, I want to extend the argument) might be able to force those changes more quickly by opting out. Here I'm going to go the columnist one better.


It is bordering on fantasy to suggest that with the right legislation and the right liberal culture, trade-offs will never have to be made. Trade-offs will always have to be made. It is impossible to have a full-time, high-powered career and still be on hand whenever your children need you. If women are settling for less demanding jobs, it is because they are making choices that allow them the income and the fulfilment they need from work, as well as a reasonable amount of time with their families.

Getting to the top involves a huge amount of energy and time. To make that commitment, to work late nights and weekends and travel abroad at short notice, you need either a battery of nannies or a very supportive partner.

I concur in part and dissent in part. Yes, as long as resources are scarce, people will have to make tradeoffs. But where is it written that a "full-time, high-powered career" equates to the notorious (or is it mythical?) 80 hour week, for woman or for man? Phantom Scribbler, writing half in jest, comes close to making my point.


All these NY Times brides/Ivy League graduates/fetishized elite picks o'the week who have walked away from the important business of boardrooms and corporate law offices are making it harder for ALL WOMEN. Because if there were more women willing to stick it out for the 80-hour weeks required for corporate success, that would make it more comfortable for ALL WOMEN, not just the ones who are already doing pretty well based on their status, education, family income, and all that.

I'm going to be contrarian here and suggest that the hotshots who are walking away are actually going to compel those high-powered corporate and professional types to rethink their job descriptions. Why? Because the highest achievers are in the best position to negotiate more favorable terms of employment. I'm making an argument from economic theory, for which I can append anecdotal support as well as advice from a career guru. I will expand on that part in a book review post the next time diminishing returns to grading set in. For now, suppose the high achievers begin saying no to the "we will pay you lots of money but you will have no time to spend any of it" terms of employment? You suppose hiring commitees might give a little on the hours, family leave policies or no? (Yes, regular readers, I have made this argument, recently, and certainly many times before.)

And, contrary to this comment in the University Diaries bull session, it doesn't necessarily require a female CEO to make the change happen.


I think the reason women should become "masters of industry" is because that gives them the power to change industry. Want more part-time work or more flexible work arangements for women (or men)? A woman CEO can make it happen.

I propose to decompose the term "trend" into two components, management fads that may not be well-thought-out, and evolutionarily stable responses to market incentives. The market incentive I'm thinking about is my old friend the backward-bending labor supply curve. Businesses that discover resistance to terms of employment that involve open-ended time commitments where the resistance increases at higher salary offers are more likely to consider other terms, particularly if they're forever attempting to replace their best people.

Marginal Utility in Madison (who sometimes does trains and planes) is thinking out loud, but read his full post, including the comments, and see some of the same thoughts emerge.


There are several angles that are worth working when considering the imperative to work as much as you can work, including the likeness of many high-hours work situations to fraternity hazing, the question of how many hours of actual productive work are actually extracted in those situations (esp. in the absence of rigorous policing of computer desktops). The celebration of workaholism for the sake of... of... well, neither PS nor I are actually able to put a handle on it, is curious.

Get enough people in responsible positions thinking this way, and the 24/7 treadmill begins to crumble. And perhaps it won't take 135 years. Why 135 years? Consider this picture. We are looking at my second great-grandparents and their children. This picture dates to the early 1870s as the baby died in August 1872. 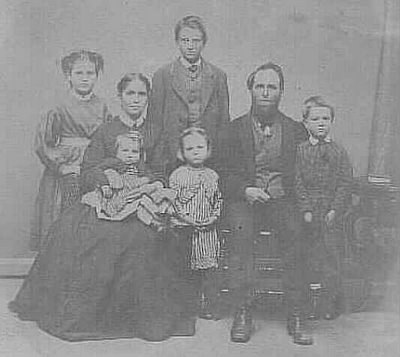 I suspect that talk of an eighty hour work week would have struck them as utopian (did that word exist in 1870?) in the extreme. Sunday might have been the Sabbath day, and the Lord might have rested, but those cows had to be milked -- by hand -- before and after church.
Posted by Stephen Karlson at 22:33