HEADING FOR DEKALB? The Chicago Tribune's Ends of the Line series visits Elburn.

Metra is providing 300 parking spots at the station, with plans to ultimately add another 1,300. This is because of its projections that, between 2000 and 2030, the Elburn area will grow more than 650 percent.

When the service began in January, the parking lot was less than half full. On my most recent exploration of Metra, the lot was over two-thirds full at mid-day on a Friday.

But you can plan for it -- that's what Metra is doing by extending its lines farther out with the possibility of extending farther still -- and someone is to blame--everyone who wants more house for the money, less congestion, a place in the country.

It's only fourteen railroad miles to DeKalb, but that's in another county. For now, images of trains passing Midwestern dairy barns are still possible. (The photo gallery is up for Elburn, although the gallery archives are incomplete for the summer series.)

Chicago Tribune photograph by Chris Walker.
For the present, Elburn still has the look of small-town Illinois, although careful readers of the photo gallery will see what the future holds.

But for now, the Kane County village is a fair representation of what Elburn was. The Gliddon Drug store is still on Main Street as it has been since 1946. The newspaper clippings posted on the store's prescription counter make a sort of throwback blog, letting local people know things of interest to the community. And Mayor Jim Willey just oozes small-town, laid-back charm on his site, www.elburn.il.us/mayorsblog.html, where he has posted shots of citizens.

The pedestrians are taking advantage of an infrequent gap in traffic on Highway 47. In the background is the butcher shop from which my bratwursts come. 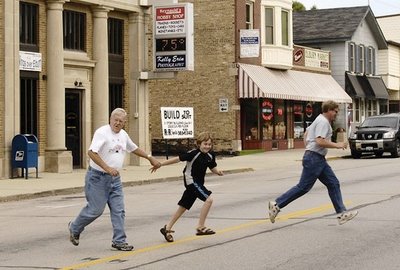 Chicago Tribune photo by Chris Walker.
Next week: Harvard, which is also a difficult destination for a day-tripper out of DeKalb.
Posted by Stephen Karlson at 23:41