A HISTORIC WAY TO SOME UNUSUAL MUSEUMS.

Last Friday's Ends of the Line series in the Chicago Tribune, featuring South Bend, (the rivet counters caught the Tribune erroneously referring to Metra) was accompanied elsewhere in the paper by an article on the troubles of Gary, Indiana at its centennial. Left unstated in either article was that the South Shore Line, which still reveals vestiges of its interurban heritage, serves both cities. I've blended photos that accompany both Tribune articles with a few of my own, from a recent inspection of the Last Interurban.

A book titled Duneland Electric divides the South Shore into four sections. Starting from Chicago, the first section is trackage rights on the Illinois Central, now known as Metra Electric. Just north of Kensington (115th Street), where the South Shore begins, is the headquarters of The Pullman Company. The headquarters building was an arson victim a few years ago. Restoration is in progress. 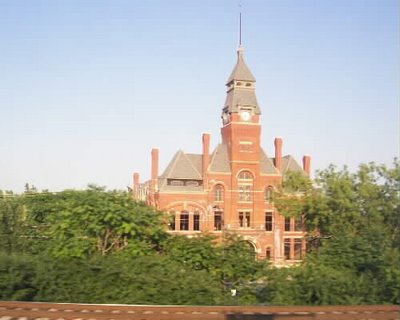 From Kensington to Gary, the South Shore is a two-track suburban operation "in the shadow of the steel mills." There's a stretch along the Indiana Toll Road where the cars are able to leave everything on the highway behind. There are not many good photo locations through this stretch.

Gary's beaches are also in the shadow of the steel mills. 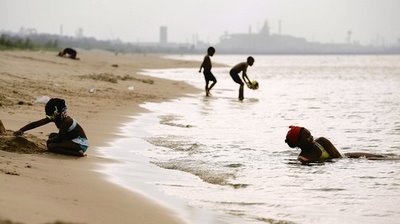 That sky looks hazy and humid and nasty, just the kind of day for building a sand castle or taking a swim. The water in Lake Michigan gets tested regularly. The beaches of the South Shore are generally safe to swim in.

The Duneland Electric section of the South Shore begins somewhere east of Gary, where the interurban leaves behind the steel mills and the parallelling railroads. 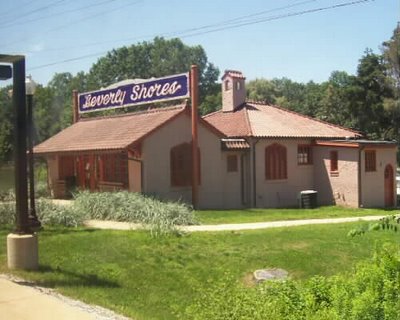 The ancient and the modern at Beverly Shores: the South Shore's one remaining "Insull Spanish" station, a lamp-post that looks like it could have come from Plasticville, and (edited out) a crawling-message annunciator sign.

The meet at the city limits: this has been a tradition at Sheridan siding in Michigan City for nearly 100 years. I've deliberately posted a long shot to illustrate the northbound train trundling through the streets of Michigan City. 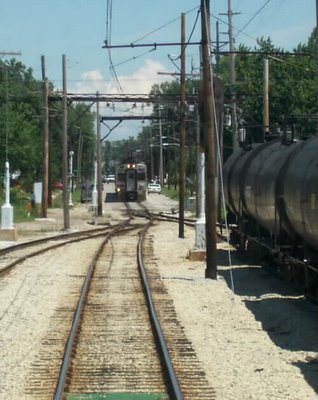 East of Michigan City comes the "interurban time machine": fewer freight trains, and more frequent cars at weekends than on weekdays. Hudson Lake is the one remaining station between Michigan City and South Bend. 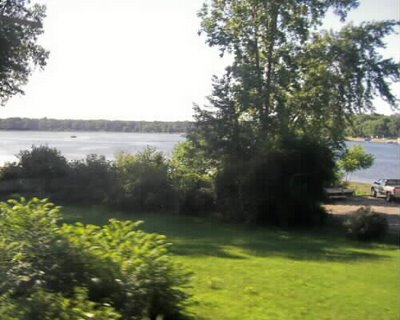 It is a flagstop. The South Shore has installed solar-battery strobe lights for passengers to activate in advance of the train (they have timers that cut out after 15 minutes.) Milwaukee Electric used a more primitive version of this system at some shelters years ago. But until recently, the South Shore timetables carried the notation fStops on signal (use light at night.) The ritual throughout the Midwest was to bring some matches and a rolled up newspaper and hope to get the newspaper lit in sufficient time for the motorman to see the light and stop the car. (But I suppose with modern flame-retardant papers and water-based inks the strobe is more reliable.)

South Bend is home to a number of tourist attractions beyond the expected Old Notre Dame. There's an indoor whitewater training center. 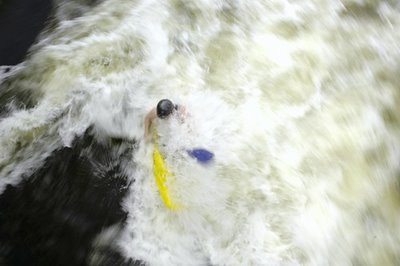 The Studebaker Museum has an exhibit at the airport inviting guests. 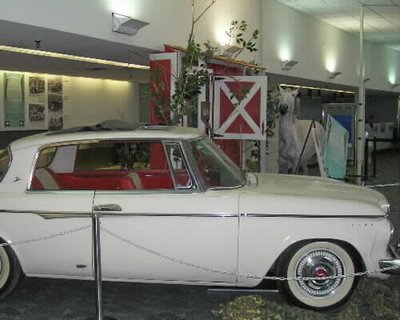 Once upon a time, Studebaker sponsored Mister Ed. (This was before the Karlson household had a television. We finally bought a television. A few weeks later came the Cuban Missile Crisis, followed over the next few months by the end of the North Shore Line, the assassination of President Kennedy, and Studebaker's exit from car manufacture. Put that dummy variable in your regressions!)

The South Bend airport recognizes that passengers waiting to check in and people meeting incoming passengers might take an interest in airport operations. 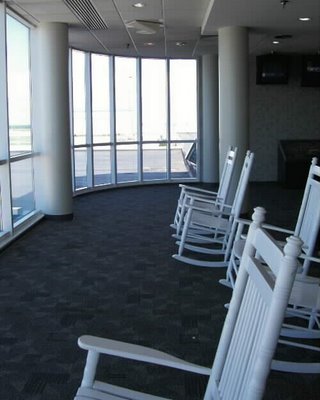 I realize with security what it is, we'll never see Detroit's open air observation deck, let alone Milwaukee's balconies above the jetways again, but airports that have done everything to hide their operations from their clientele are missing something.

This Delta plane has just arrived from Atlanta. Somebody could fly to South Bend and ride the interurban to Dune Park or Hammond or change to the Metra Electric at Kensington. 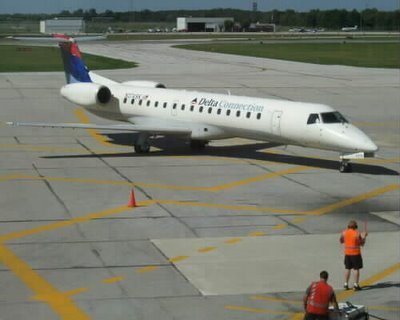 Outside the airport is a recently-opened war memorial. The crosses have dog tags but no names yet. 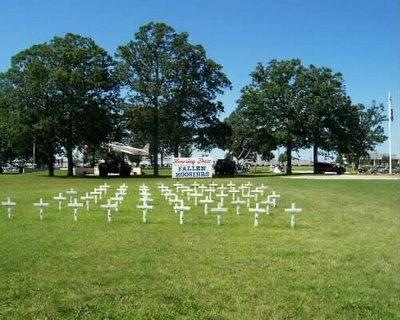 The South Shore's station at South Bend does not lend itself to unobstructed views of trains and passengers. The Tribune photographer makes a good effort at an artistic composition in tight quarters. 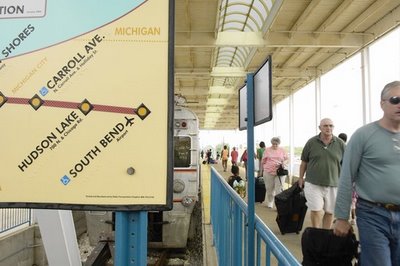 The approach to the airport has interurban-like tight curves. 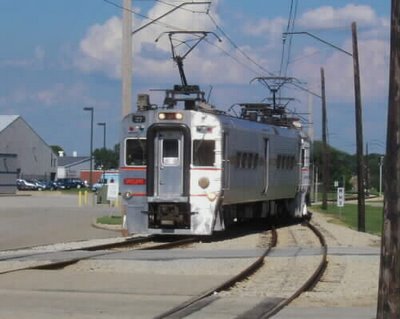 The first mile or so toward Chicago bring to mind the side-of-road trolley of the early years of interurban service. Worth a look if you're in the Chicago area.
Posted by Stephen Karlson at 22:40