WHEN THE WIND DOESN'T BLOW. August regatta season makes for challenging weather conditions in the State Line. Monday featured strong northwesterlies, the first harbingers of fall frostbiting, and there were still good winds Tuesday. But then comes in the high pressure and the winds swinging around to the south and then ... quitting. If you can't sail, play beanbag. No guns, no protests, no throwouts! 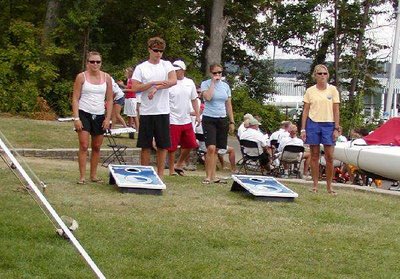 Unattributed Inland Lake Yachting Association photograph
Lake Geneva Yacht Club, 17 August 2006.
I still suspect that beanbag is as popular as it is among the twentysomethings because they never had the chance to play casual bag toss games as eight year olds; in this picture probably eight year olds with summers full of Optimist dinghies and Cub class sloops.

One thing Lake Geneva never had was a beachfront twister (think Coney Island Cyclone or Bay Beach Greyhound or Belmont Giant Dipper). The C-Scow sailors improvised something close to a beachfront twister. (If you've never been to Lake Geneva, be advised that the club is at the bottom of a 75 foot high ridge. Southerly breezes coming over the higher spots can make for some challenging sailing close to the docks.) Note that some marks are to be left to port and some to be left to starboard. My source tells me the noodles were used for fending off. 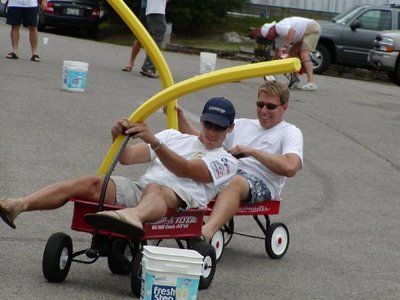