ANGLICIZING FORM B. The March issue of Railway has reached Cold Spring Shops, with news of line closures for maintenance of way (engineering possessions there) on the West Coast Main line and on the suburban lines out of London Liverpool Street, and a passenger protest on First Great Western. 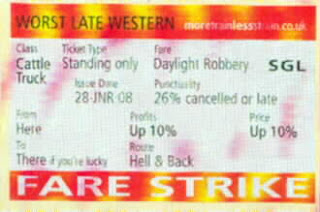 The issue also includes a brief report on Santa Fe, er, BNSF, trebling over Cajon Pass (there is a distinct fourth line, part of Union Pacific's, originally Southern Pacific's Colton to Palmdale line that avoids much of the Los Angeles traffic) that concludes with,

It should be recorded that while all this work was ongoing, the BNSF and UP Railroads continued to run their normal services. At times of light traffic flows, one of the lines would sometimes [be] taken out of use and given over to the engineering departments but, in the main, the work fitted in with the normal flow of trains.

Unlike in the UK, where engineering work governs the running of a railway, the US demands that engineering and track work fits in with the core business of running trains and earning revenue.

The columnist, Colin J. Marsden, introduced his article with the observation that the Cajon Pass line is the "world's busiest freight artery," hosting some 150 movements per day on busy days. There are other lines east from Los Angeles, but these are also, despite expansions, at capacity. US railroads have no option but to keep maintenance of way forces from occupying tracks at the same time as trains. The procedure I am most familiar with is the Form B track bulletin. It's most commonly used to protect one track whilst trains running in both directions use another track.
Posted by Stephen Karlson at 14:14

Email ThisBlogThis!Share to TwitterShare to FacebookShare to Pinterest
Labels: ferroequinology