MAKING THE BEST OF THE CIRCUMSTANCES. When I returned home, there was a message from Amtrak time-stamped noon on Friday, June 25, advising me that some of my trip to Portland would be by alternate transportation. As far as I know, there is nobody on Amtrak's payroll with the title of seer, anticipating diesel troubles and signal failures in Wisconsin. I learned from other conversations on the train that the previous day's Builder was going to turn at Whitefish with a rockslide in the way, or would have been turned at Whitefish with bus service in substitution had the rockslide not been cleared. The message was probably anticipating another day of bus substitution around the rockslide. Just as well I had left before the message came in: a long bus ride on mountain roads in the middle of the night isn't exactly vacation travel. In any event, Sunday, June 27 begins in Sandpoint, Idaho, with a 5:20 departure. I can now claim to have seen some of Idaho by day, although I have yet to step off a train or otherwise set foot in that state. On the approach to Spokane, the conductor alerts all passengers destined to Portland or changing trains at Portland to prepare to detrain for substitute transportation, a bus. I make some inquiries and discover that passengers ending their journey in Portland or detraining in Vancouver, Wash., may stay on the train. The announcement primarily affects a large party on a Glacier Park package tour that will be continuing their journey on the Coast Starlight to California. These passengers will be bussed to Klamath Falls, Oregon, to intercept the Starlight there. The Starlight is due Klamath Falls around 10 pm. The Builder arrives Spokane 6:29:10. Some passengers are going to have to entertain themselves in Klamath Falls for a few hours. Some passengers on the Super Dome excursion recommended I try a Red Lion hotel near the Portland convention center. It's sold out, but one on the Columbia River in Vancouver has an attractive rate. It's real close to the Vancouver station, and I ask to detrain there rather than in Portland. No problem, the faster they unload the train at Portland, the better the chances of turning it to head east that afternoon. 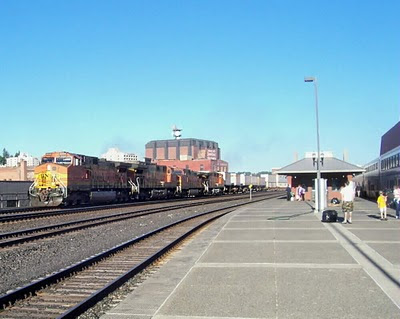 Spokane has a new station with an island platform. The traditional station became a visitor center for a world's fair (does anybody do world's fairs any more?) Burlington ran a few freight trains in both directions while the Builder was serviced and divided.

There was time to wander along the platform and check out this classic bakery. 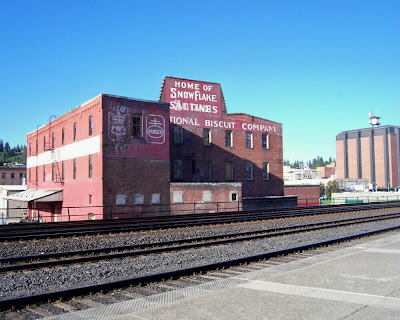 The diesels are serviced off the platform, and I did not see the power that relayed Seven to Seattle. Seven got away at 7:14, and 84-21 tied on to 34027-33049-31027-32048 for Portland. Under way 7:34 according to the conductor's radio, 7:32:47 on my watch. Lounge attendant makes an announcement about the air conditioning in his car. The automatic cycling isn't working, so he's controlling it manually, meaning the car will sometimes be very chilly. He also announces that cinnamon rolls and bottled water will be put aboard for all coach passengers at Pasco.

Eastern Washington looks almost as arid as the Gobi Desert, although the surroundings are not as hardscrabble.

The ruins of Milwaukee's overpass at Lind witness our passage. This overpass is in the gap between the electric operations west from Othello, Washington and east from Avery, Idaho. 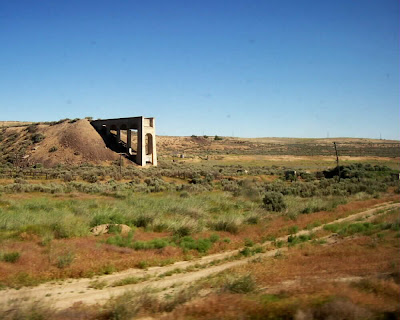 Milwaukee bought six trainsets for the Olympian Hiawatha precisely to have sufficient time to turn a train at each end of the line. That expenditure was probably not the one that broke the railroad.

Beyond Pasco, the railroad uses the Columbia River valley, and the terrain loses its steppe-like qualities. The sleeping car attendant sets up the sandwiches put aboard at Havre. Good sandwiches, and lots of them. Sleeper passengers offered seconds (I passed) and the remaining sandwiches and cinnamon rolls were made available to all takers. It's commendable that emergency provisioning is possible for the trains, although more reliable equipment, whether we're talking about control systems on ten year old diesels or cooling systems on thirty year old lounge cars, would be more commendable. 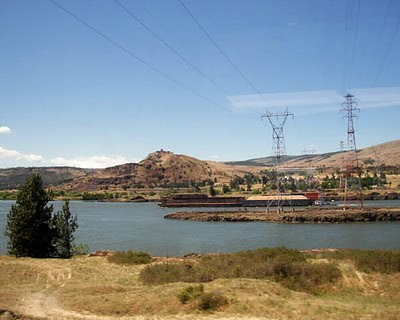 The Columbia River gorge works like a wind tunnel. The winds were destructive of Milwaukee Road trains on its crossing, but they make for thrilling wind surfing and dinghy sailing. The latest method of riding the winds is called kite boarding, which involves controlling a small spinnaker with kite strings to propel a surf board. 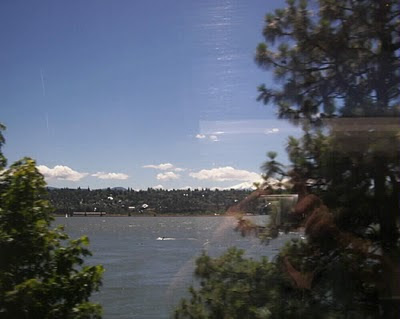 That's The Dalles, Oregon, on the Union Pacific side of the river, and Mount Hood in the background. If you're going to be delayed on the Empire Builder, at least be grateful that it's not your usual Pacific Northwest overcast. Passing trees made getting a good picture of Mount Hood challenging, but I was up to it. 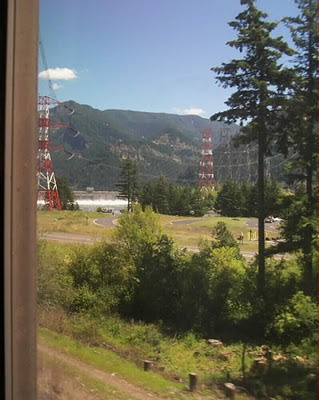 There were no ships of plenty locking through at Bonneville as we passed. The conductor made another announcement, advising passengers headed for Washington points on the Talgo train to detrain at Vancouver rather than attempt the connection at Portland. Arrive Vancouver 2:25. The Builder will turn and attempt a 4:50 departure for Chicago. I'm headed to the Red Lion for a long shower and a nap. Passengers headed north will have about an hour layover in Vancouver.

Posted by Stephen Karlson at 23:27