WHAT FIRST CLASS TRAVEL LOOKS LIKE. Amtrak, sometimes with the encouragement of Congress, takes a dim view of amenities. Yes, the overnight trains include sleeping cars with dining car meals included in the fare, and yes, the sleeping cars often sell out early in the summer. Whether that reflects the paucity of sleeping cars or the decline in civility manifesting itself in the coaches is for another day.

The carrier is not averse to hauling other people's rolling stock, provided it's in running condition, and Railroading Heritage of Midwest America recently ran some weekend trips with the Super Dome and assorted first-class equipment from the Cities on Friday, returning from Chicago on the Sunday. The operator sold tickets to intermediate stations, and I bought space on the Super Dome for a quick trip to Milwaukee. 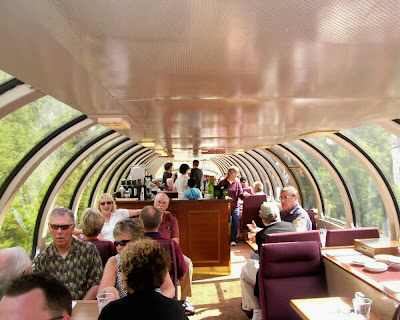 23 May 2010, somewhere near Sturtevant
The car has been extensively rebuilt inside, with utility space where the bomb bay lounge used to be and table seating upstairs, where there used to be coach seats. (There's no reason not to set up coaches with groups of seats facing tables in this fashion. There are a few British locomotive hauled trains with that configuration. Very pleasant.)

I think the last time I rode a Super Dome to Milwaukee out of Chicago Union Station, it was on the Afternoon Hiawatha, either the last hurrah for the 75 minute trains or the 78 minute train. The Empire Builder is not quite that fast, but it gave a good ride, and the trainspotters were out getting their pictures.
Posted by Stephen Karlson at 22:32