Locomotives capable of exceeding the 110-mph speed limit on the passenger rail corridor between Chicago and St. Louis will be bought for Illinois and four other states under a process the Illinois Department of Transportation will lead, officials said Thursday.

I'm sure there are safety appliances to consider, and having one prime mover rather than two offers some advantages. But the officials could do worse than this. 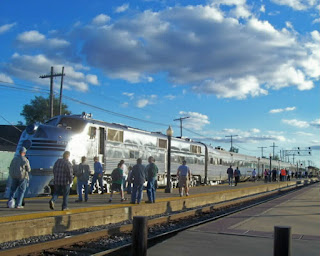 Apparently, some members of the public thought as much.  First and Fastest published a report on last September's Nebraska Zephyr excursion.  Amtrak, Metra, and the Illinois Railway Museum worked together to make the experience authentic.  Amtrak assigned Track 12, a track normally used only for Metra dinkies, in order to load under the original remaining trainshed.  Metra assembled inbound dinky 1302 of cars (other than the cab car) lettered or relettered B U R L I N G T O N (yes, in the proper Z E P H Y R typeface) to flip as the outbound 8.40 departure, and brought it in on adjacent Track 10.  First and Fastest reports that some arriving passengers on that dinky took mobile phone pictures of the unusual move, with a few of them wondering if they were seeing the new higher-speed Michigan and St. Louis trains (!)  I'm told that 9911 has 90 mph gearing now, not the 117 it was built to achieve.

Amtrak and Illinois Department of Transportation, you could do worse.

Posted by Stephen Karlson at 14:14