SNOW EVENING. Headquarters opted to cancel classes effective 6 pm on Tuesday. (Thus the somewhat earlier start time for that evening's posts.) Any decision to cancel classes in the middle of the academic day will be second-guessed.

Officials decided at 3 p.m. Tuesday to cancel all classes in session after 6 p.m. Officials thought canceling mid-afternoon classes could cause confusion, so the announcement was made for night classes only, [human resources associate vice president Steve] Cunningham said.

The 6 pm cancellation spared the second shift its commute. Some years ago, the university opted to cancel all classes in session after 3.30 pm. That decision pleased nobody, as most commuting students and faculty on first shift schedules had already braved the elements only to be told to go home early.

Other weather news: The snow on Monday and Tuesday was augmented by the northeast winds. Here's a snowfall map from the Northern Illinois University weather office. The green blob oriented northwest to southeast, southeast of Rockford, includes DeKalb and two of the principal commuting routes from the Fox Valley.

First, a lot of kudos: First to the student(s) who did a fantastic job here at NIU taking the official measurements during the storm; this was NOT an easy thing to do! Kudos also to the DeKalb Public Works and NIU Grounds for keeping the streets passable...this was difficult with 30-40 MPH wind gusts for 12 hours. When all was said and done, we wound up with 5.5", on the high side of totals expected initially, but within the 3"-6" range. But with enhanced lake effect snow, our eastern campuses got hit harder. O'Hare got 10.2", and Naperville got 5.5". It was quite variable depending on what band of snow you got into. It's all over now except right along the immediate lakeshore and southern suburbs of Chicago. And what is being described as the "near perfect storm" is just blasting the eastern U.S. Areas that got hit with 141" of lake effect snow are bracing for---get this---50" more! If you think it was bad here yesterday, keep reading... 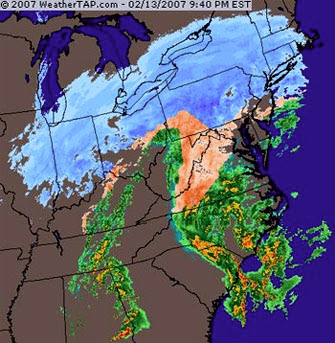 See that finger of "lake-enhanced" snow feeding from the Door Peninsula into northeastern Illinois. That persistent snow was the reason the Chicago area universities, and Northern Illinois, decided to cancel the evening sessions. The link shows a number of other radar and satellite images.

And even further east, that's not scenic effects on a Lionel set: 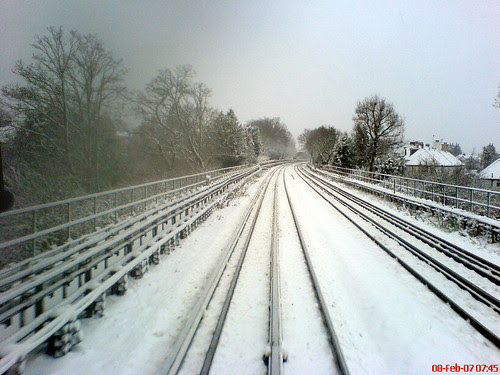 DeKalb received another inch of snow Friday night into Saturday. There have not been any substantial one-day snow events, but the snow cover has had the better part of a month to accumulate. (It has been a while since we've seen that kind of persistence around here.) 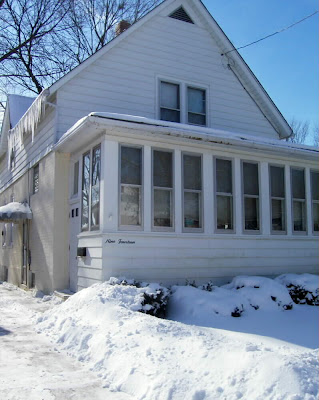 The squirrels that live in my tree have been feasting on the corn the neighbors kindly provide. 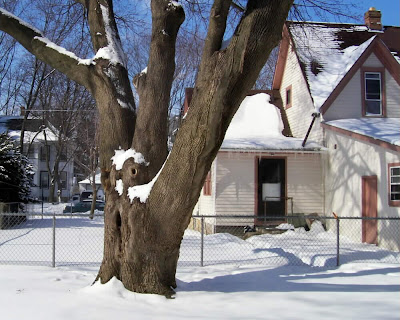 I'm told the next snow events will accompany above-freezing temperatures. The results will not be as pretty. This snowpack is all cold-air powder. It falls pretty and as long as the temperatures stay low, it stays pretty. The anticipated slush is nowhere near as photogenic.
Posted by Stephen Karlson at 19:01

Email ThisBlogThis!Share to TwitterShare to FacebookShare to Pinterest
Labels: winter