Yes, now. On occasion, I will fire up the cooker even in the middle of winter (although my preference is for a sunny weekend day so as to get everything cooked before sunset.) Onetime storefront operation Johnsonville has recently put on offer frozen, precooked, microwaveable bratwurst complete with what look like grill marks. They're a substantial advance over the TV Dinner. 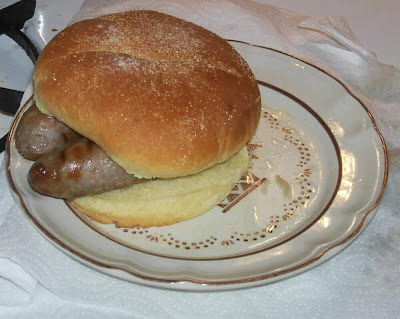 And thinking about bratwursts and sailing season and other summer things gives occasion to recommend a few other bratwurst-related posts. Sean Hackbarth's American Mind investigates bratwurst in Washington, D.C? Yes, and some good ones.


So imagine my surprise to see the lowly bratwurst on the menu of the Blue Duck Tavern in Washington's Park Hyatt (1201 24th St. NW). I had to order it -- and I was even more surprised when I tried it. The Blue Duck Tavern's handmade bratwurst is served over sauerkraut braised in beer and white wine that would make a sauerkraut lover out of the most sauerkraut-hating soul. But the pièce de résistance is the bratwurst itself -- delicately seasoned, cooked perfectly and melt-in-your-mouth good.
I was convinced. There was such a thing as a well-made bratwurst on the East Coast. Perhaps there were other restaurants in the D.C. area serving good or at least acceptable bratwurst. I began searching for more surprises and found several places offering a taste of home. Café Berlin (322 Massachusetts Ave. NE), close enough to Capitol Hill for a lunchtime stop, serves a tasty and affordable bratwurst with German potato salad.
On the other side of town, Leopold's Kafe & Konditorei (3315 M St. NW) offers a crunchy-on-the-outside, meaty-on-the-inside bratwurst along with other classic Austrian dishes. And if you're looking for that oompah German feel in a dining experience, Old Europe (2434 Wisconsin Ave. NW), founded in 1948 and the granddaddy of D.C.'s German restaurants, offers an acceptable bratwurst and sauerkraut.
But for an experience that takes you back to Wisconsin, hop in your car and head to Jessup, Md. The dark-paneled dance hall of Blob's Park (8024 Blob's Park Road) has the feel of a traditional Wisconsin wedding, including a live polka band, simply made German dishes of sauerbraten, bratwurst, knockwurst and sauerkraut, along with a selection of German beers that any connoisseur could love.

And being served to rescue workers at Ground Zero, as depicted in World Trade Center? Yes, but not immediately after the attacks.


As the film cuts to reactions from around the world, it stops at a Sheboygan diner where customers are watching news coverage of the terrorist attacks. Later, as rescuers emerge from the smoking ground zero, they walk past a sign that reads "Wisconsin Loves NYC Cops" where they are handed what they are told is "the best brat you'll get in the whole world." The scenes would be gratuitous if they were not grounded in as much fact as pork.
"There were Wisconsin cops at the scene and they did do bratwurst," [director Oliver] Stone said during an interview. The scenes were in the script from the start.

The cameo was too brief for me to check for toppings. In Milwaukee, sauerkraut is permissible. In Sheboygan, that's verboten. Mustard is brown, never yellow.
Posted by Stephen Karlson at 19:39