VINTAGE TRAINS. I wasn't aware that Amtrak operated commuter trains, although the gentleman who introduced the incoming Vice President at Wilmington described Mr Biden as Amtrak's No. 1 Commuter. Perhaps Mr Obama will help us get trains to DeKalb.

The trains that brought the presidential party from Philadelphia to Washington comprised Amcoaches and Amcafes, the first rolling stock produced new for Amtrak and put into service in 1976. (The bilevel 400 cars had a shorter service life.) 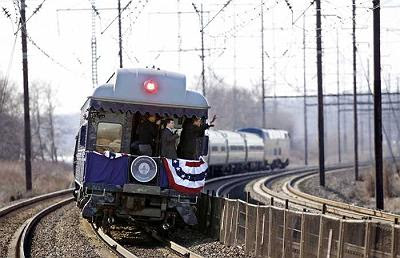 The power on the presidential train is Genesis diesels 44 (symbolic enough) and 120 (were the other engines selected from the Philadelphia pool on the basis of reliability?) On the markers end, former Georgia Railroad business car 300, converted from Pullman 10 section buffet lounge General Polk (Leonidas? James K.?) I was watching some of the CNN coverage of the trip, including Wolf Blitzer referring to the tail car as a "caboose" and later acknowledging an electronic mail from a California listener that the last car on a train is not always a caboose. For the record, cabooses pretty much vanished from freight trains by 1990, although it's no secret around here that the punditocracy's rail awareness could use work. The CNN team put together highlights of the trip.

An observer in Norwood, Pennsylvania, posted movies of all the extra movements.

The description includes the follies of trackside security. It's not quite "Iron Curtain Pennsylvania," but read on.

Amtrak ran a track and catenary inspection vehicle over Track 2 on Amtrak's Northeast Corridor and then a pilot train before sending The Obama Express south to Wilmington DE, followed by the protect/press train. First the police let us stand on the platform, then Secret Service told them to clear the platforms, moving the crowd back about 5 feet, then Homeland Security told them to move everyone from the inbound side to the outbound side, given another 10 minutes and another government agency, we could have wound up trying to see the train from New Jersey.

The television commentary included some speculation about the difficulty protecting the train. I'm sure law enforcement had some worries. Unlike the Abraham Lincoln train today's excursion was supposed to honor, the people of Baltimore were quite pleased to have Mr Obama stop and give a speech. A 1951 movie, The Tall Target, is a dramatized version of the true security troubles Mr Lincoln had getting through Baltimore, in those days a nest of Democrats of a different sort. Mr Lincoln did not have the benefit of The Pennsylvania Railroad's crosstown tunnels, and I believe he had to change trains in Baltimore.

At You Tube, the discussion of the Norwood video includes speculation on why all the trains had diesel power. The inauguration party boarded at Philadelphia's 30th Street, which is electrified. Perhaps the simplest explanation is correct: the electric train can be stopped if somebody breaks the power supply, which can be done at a distance from the tracks.

The pilot train was two diesels, one coach and an inspection car, and members of the press not favored with White House credentials had a train that followed the presidential train. (That train would probably have been left to cool on some siding had its diesels been required to rescue either Extra 44 West or Extra 54 West.)

Posted by Stephen Karlson at 22:37