WORKING YOUR WAY THROUGH COLLEGE?

Once upon a time, an ambitious student could make expenses at a state university with a summer factory job and a school-year commissary job, or a part-time hitch in fast food, or perhaps at the library.  No more. "The economic cards are stacked such that today’s average college student, without support from financial aid and family resources, would need to complete 48 hours of minimum-wage work a week to pay for his courses—a feat that would require superhuman endurance, or maybe a time machine."  A Michigan State student analyzed the inflation-adjusted relationship between minimum wage and tuition: once upon a time, a Michigan resident could earn a credit hour in eight hours (put another way, a month to make fifteen credits.  Books, rent, food, that's where the other hours come in.)  More recently, it's sixty hours, or three weeks, for one credit. 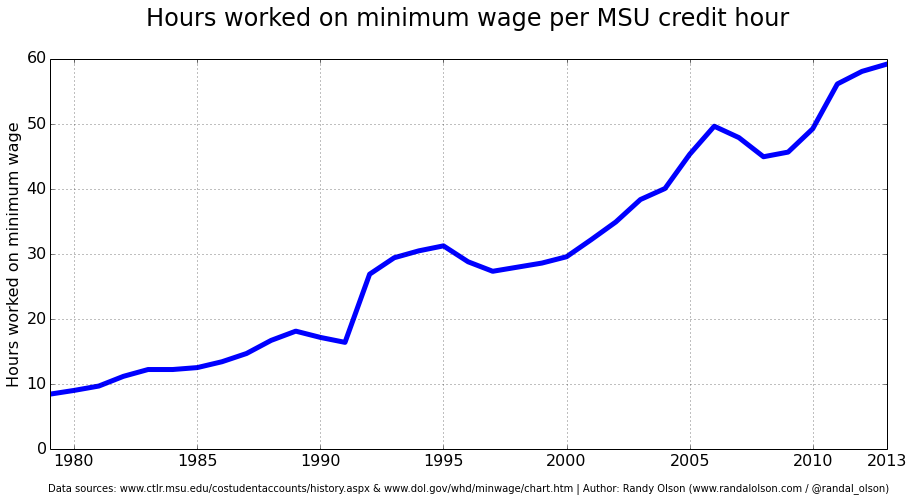 Thus, 45 weeks to earn those 15 credits: does it come as any surprise that there are more part-time students, or students attempting to manage a full time job and 15 credits? "In short, I’d like my readers to walk away knowing that it’s not nearly as easy to work your way through college as it used to be — stop telling us to do it just because you did a decade or more ago."

None of which precludes further investigation of the country-clubbing of higher education.

Or engaging in the inspection of tradeoffs that the dean at Pioneer Valley Community introduces.


If we’re serious about educating lower-income students at scale in a sustainable way, the high-tuition high-aid model doesn’t work.  If it did, we’d be enjoying unprecedented economic growth and a rapid expansion of the middle class.  Instead, we need to find ways to make the institutions that most students actually attend just as appealing to people with choices as the pricier places are.

I know that 1968 isn’t coming back.  The challenge facing higher education leaders now is to interrupt the circuit of self-reinforcing decline through intelligent, sustainable innovations that preserve the best of what has come before.  That’s hard to do.  It’s a lot harder than just raising prices and hoping for the best.  It involves, among other things, paying attention to messy realities like politics, institutions, and history.  But it’s worth it.

In particular: did the public investment in additional state universities during the 1960s foster precisely the stratification that's more evident in these U.S. News-obsessed times?  California, to invoke one of the dean's examples, explicitly set up a hierarchy with San Diego, Los Angeles, and Berkeley for the prestige, a host of California State campuses, and open-admission community colleges.  I don't know how it played out in California, but in Wisconsin, the aspiring lawyers aimed for Madison, and the future Kroger managers found their way to that task at the Wisconsin State University campuses.
Posted by Stephen Karlson at 16:50