WHAT RAILROAD INFRASTRUCTURE LOOKS LIKE.  Chinese railroads build crumply bullet trains and disregard fundamental safety procedures.  The elevated sections those trains run on might be built out of tofu, as the railroad-building project may have exceeded the capability of the industrial base to provide high-strength concrete and reinforcing bar.

The Union Pacific might be hostile to passenger trains, but they know how to build infrastructure for freight trains.


Union Pacific in these parts impressed me even more than those farms and towns: Concrete ties on both main tracks, 50-mph crossovers on switches with movable-point frogs, track good for 70 (79 if it’s a business-car train). The railroad was busy this day, too. I met 10 westbound freights in the 30 miles between Missouri Valley and Denison, Iowa. Say what you will about Union Pacific, but it is not afraid to spend money on its infrastructure. And speaking of infrastructure. . . 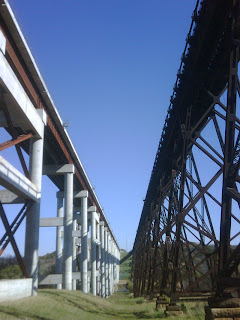 Trains weblog photograph
That business car train can take the new bridge, at left, at 79 mph, and the bridge is probably capable of handling that train at 110, although Union Pacific prudently won't do that, if only to forestall some Iowa Member of Congress from asking for fast corridor service between Chicago and Omaha by way of Ames, Cedar Rapids, and DeKalb.


The Kate Shelley bridges, one of them 109 years old, the other two months new, soar into the sky above the Des Moines River about four miles west of Boone, Iowa. I’ll give you directions: In Boone, cross the UP tracks heading north on Marion Street, take your first left and stay on that road. You will cross the Des Moines on a long, one-lane wood-plank bridge that makes your heart stand still. Good luck.