WHAT WAS IT THE ENGINES SAID?  In North America, a number of new steam locomotives have entered service or are under construction.  Don't look for anything resembling a Hiawatha or Lima Super-Power, however.  Mainline power of the Gilded Age and the turn of the century is easier to transport and to operate on museum or shortline trackage (the major railroads either prohibit anything exotic, or run their own steam programs). 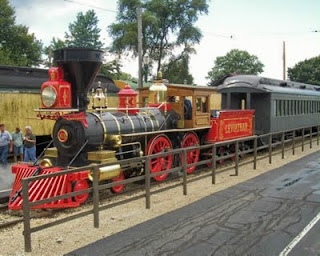 Illinois Railway Museum, 13 August 2011.
Leviathan is a relatively new locomotive, replicating as far as is possible one of four locomotives Central Pacific purchased in 1868.  A sister locomotive, Jupiter, was the eastward facing locomotive at the Golden Spike ceremony.

We're looking at Leviathan's first run with a train ... providing a knuckle coupler and air brakes consistent with the historical integrity of the replica gave the insurers and inspectors more fits than the builder.  The coaches are early twentieth-century and a bit heavier than the Gilded Age coaches the original would have pulled.
Posted by Stephen Karlson at 11:32