ELECTRICITY KEEPING ITS OWN BOOKS.

In the pursuit of cross-references, I came across a story from last fall about Amtrak's order for new electric locomotives.  OK, the HHP series of locomotives that were supposed to succeed the AEM-7 Toasters underachieved, and the Toasters, although good motors, had about half of the service life of the GG-1, and the GG-1 was also capable of 10,000 hp (as a short term rating) and it looked better than any of the stylized boxes currently moving Northeasterners. 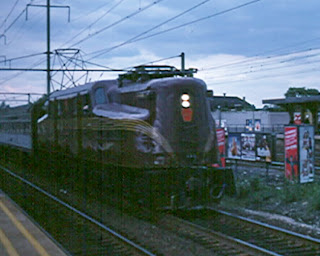 A passage in the story about new motors, however, called for an excursion deeper into history.


The new trains, which are being built by Siemens AG based on a design it already sells in Europe, will cost a total of $466 million and have a variety of refinements. One important one is a feature called regenerative braking, which is common in cars like the Prius but not universal in electric locomotives.

Here is how it works: When a car or a train uses an electric motor to accelerate, the motor turns electric current into physical movement; when regenerative braking is used, the motor reverses its role. It acts as a brake and turns into a generator, converting movement back into electric current.

This works better in a train than in a car. In the car, the current goes back into the battery, which has limited capacity and can only accept it relatively slowly. On the train, the energy goes back into the overhead power lines and the electric grid, which can accept all of the energy quickly.

Jürgen Wilder, vice president and general manager of rolling stock at Siemens, explained that this allowed trains to exchange energy. “Maybe another locomotive at the same time can be accelerated with the power that locomotive is going to give back,” he said.

There are no mountains on the Northeast Corridor, but you don't have to have German bullet train technology to have the train going down the mountain help power the train going up.

It's not as fast as the new Amtrakers, and you wouldn't want all that unsprung weight on drivers these days.  But when the first ones rolled out of the factory, they had a much more spectacular debut than anything Amtrak will be able to come up with for the fourth set of successors to the GG-1s in the last forty years. 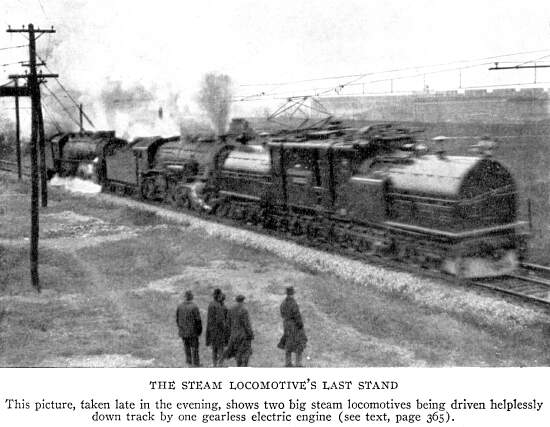 It's a pushing contest, as no drawbar then or now, can handle the starting tractive force of a big electric locomotive.

Reminds me, I have to do a post about those Milwaukee Road motors late in their careers ...

Posted by Stephen Karlson at 22:55

Regenerative braking goes back to the dawn of mail line electric traction with the Swiss "Crocodiles".

Use on high-speed passenger trains is more recent, though. Always used to be a mountain thing.

I did a little research. The Puget Sound boxcabs, with regeneration, took to the Rockies a year or two before the Ce6/8 units rolled out. I forget the timeline for Virginian's squareheads (imagine a Ce 8/10 in a boxcab arrangement) which used regeneration and an induction motor drive.