Northern Illinois's football team gets it done the hard way.  The title belt even says so. 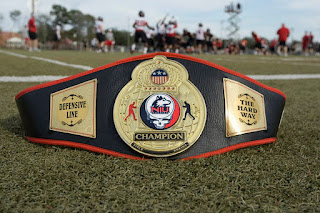 Spot the other team thirteen points, have the starting quarterback hop off the field: all in a day's work.


After falling behind 13-0 quickly in the first quarter, the Huskies roared back, scoring 31 unanswered points and never looking back en route to the team’s ninth straight victory.

Harnish hit Perez Ashford on a 9-yard touchdown pass two plays after a disputed spot on fourth down kept the drive alive, pulling the Huskies to 13-7 just before the end of the first quarter.

The Huskies briefly lost Harnish to an injured left ankle early in the second quarter, but backup Jordan Lynch engineered a seven-play, 78-yard drive that ended on his 3-yard touchdown run to give NIU a 14-13 lead with 4:49 left in the first half.

The Huskies added another touchdown just before the half when Doeren gambled on the final play of the drive, going for the touchdown with 2 seconds remaining instead of opting for a field goal.

Jamal Womble plowed forward for a 1-yard touchdown to give Northern Illinois a 21-13 halftime lead.

In the second half: a touchdown pass immediately after the interception, and an interception return for a touchdown. Something Packer-like about all that.

The official clock and the referee's field radio didn't work very well, and the replay officials are becoming an irritation.  On the other hand, with Alabama's victory in the Confederacy Bowl, er, BCS Title Game, the longest collegiate football winning streak in the land belongs to Northern Illinois. 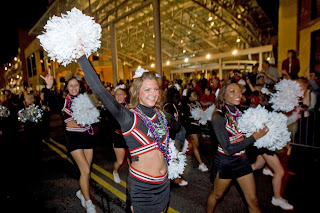 The mascots also made the trip.  The university adopts shelter dogs (Siberian Huskies being very high maintenance dogs) and keeps them on the traveling squad as long as they are able. 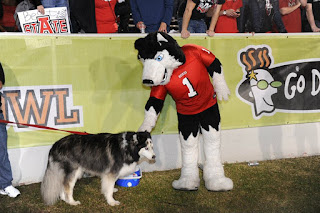 
One popular activity at televised sporting events is to reverse-acronym ESPN. 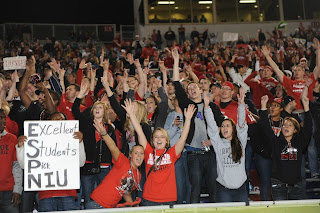 There is some truth to their claim, and the university's latest strategic plan proposes to increase enrollments and raise the academic profile.  There's one pitfall.  Both Arkansas State and Northern Illinois are on record among the sports pundits as aspiring to be the next Boise State (a phenomenon we've seen in these pages before.)  That's troubling, as one entry in a Historiann roundup of Excellence Without Money comes from Boise State.


My sense is that our students, and particularly our undergrads, are predominantly working class. Last I checked, our four-year graduation rate is 8 percent, and the six-year is 26 percent, but of course that doesn’t say much about reality, as many of our students are transfers from elsewhere, and they don’t figure into graduation rates.* (Cross-reference.) Many of my students are my age (36) or older.  This semester, I have students born between 1957 and 1993, which, as you can imagine, makes for interesting discussions.  Many are veterans.  Many have fought with addiction in various forms.  About one-third are Mormon.  The overwhelming majority are white.  Many are single parents. At least three of my students have initiated divorces this semester; I can’t remember having any married undergrads at Davis.

Commuter universities are like that. Those tales would not be strange to anyone with experience at Wayne State or Illinois-Chicago or Wisconsin-Milwaukee.  The problem, though, is in attempting to raise enrollments and the university's academic profile on the cheap.


I’m not sure why our administration wants to bring in more students, as we’re having a hard enough time graduating the students we already have.  Perhaps it’s because if we’re investing heavily in the sciences, we’re going to need to recoup the costs somewhere–and where better than by making arts and humanities faculty teach more classes, each with a significantly greater number of students?

There's a lot more in that post, and it will reward careful study.  It's corroborated by a Cold Spring Shops source who notes that the existing Boise State library is inadequate for some areas of research.  The good news is that Northern Illinois's administration is, publicly at least, making clear that a larger enrollment will require a larger faculty.

There's some campaigning (appropriate on Primary Night) to get Northern Illinois out of the "others receiving votes" category.


It’s time for the Huskies 0-and-forever drought of Top 25 finishes to end as well.

I never thought I would write those words this season. Not after NIU’s defense looked unfit for college football – let alone the country’s upper echelon – in the season’s early weeks.

As they say, Developing.
Posted by Stephen Karlson at 23:51