Any large vertical surface in DeKalb is a candidate to have an orange spotlight aimed at it. 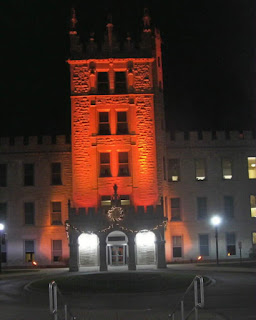 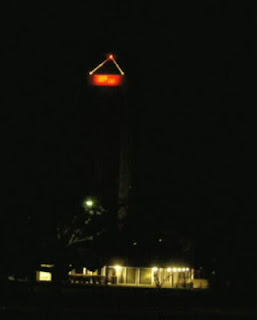 The Holmes Student Center, viewed from the bus turnaround west of the liberal arts complex.

Red And Black Attack have posted roundups of press coverage from Monday and Tuesday.

USA Today have the primer on the past fifteen years, in which four coaches worked with multiple cohorts of young men to turn a winless team into one with a winning tradition.


In [now retired coach Joe] Novak's fourth season, Northern Illinois won five games for the first time since 1992. The Huskies posted seven winning seasons in a row under Novak from 2000 to 2006, including a 10-win 2003 season that included victories against Maryland, Iowa State and Alabama.

"I remember him always saying he had a plan, and he achieved the plan," [then athletic director Cary] Groth said. "He planned the work, and worked the plan."

Slowly but surely, over the span of nearly a generation, Northern Illinois rose from the hinterlands of college football to the Orange Bowl against No. 12 Florida State. So why has the Huskies' run to the BCS been greeted with such negativity?

"Northern didn't do anything but play their season," Novak said. "The rules put them in the game. To downgrade and denigrate … if you don't like how the setup is, then change it. But good God, don't do that to those people.

The Chicago Sun-Times decides now is a good time to investigate all those empty seats in the stadium.


Even on the university’s 756-acre campus, there were few outward signs of enthusiasm for a team that had won 20 of its last 21 games, had earned its highest national ranking since 2003 and had a Heisman Trophy candidate in quarterback Jordan Lynch. It illustrated what some describe as a disconnect between the team, the community and the student body, the causes of which are difficult to identify.

The team has done its part, winning the most games in the MAC in the last decade. Its 83 percent graduation rate ranks 16th in the nation.

“It’s hard to understand,” said former quarterback Tim Tyrrell, a conference MVP. “How do you not go out to watch that team? Maybe there’s more to do or people are watching it on TV. I don’t know what to blame it on. Northern is doing a great job of trying to maintain everything that would grow sports in college. They have winning programs. They’re trying to bring back alumni. They don’t just call when they need money. They have really attempted sincerely to get you involved with the school. I don’t know. I don’t understand. The facilities are ridiculous [compared to] when I was there. They’re getting the athletes. They’re just not getting the kids out there. I don’t know why.”

There’s no easy answer for why attendance has declined, even though NIU has 165,000 alumni in the Chicago area, according to Joe Matty, executive director and CEO of the NIU Alumni Association. A myriad of factors might or might not help explain the empty seats at Huskie Stadium when Toledo visited Nov. 14.

Leave that myriad of factors aside, and focus on that Wednesday.  It's really very simple.  Tuesday night is for working on group projects and going over class notes.  Wednesday night is for preparing presentations and rushing to complete assignments that are due Thursday.  Saturday afternoon, or early Saturday evening, is for football.  And yes, more than a few Northern Illinois students are working, often weekend-intensive shifts in retail or warehousing.  But it's easier for Chicago area alumni to get away for a Saturday event than for a Wednesday night game.

Repeat with me:  Saturday is for college football.

And here's an interesting discovery of Northern Illinois by Time.


Northwestern University, the 20th-ranked college football team in the nation, won’t win a national title on the field this year. But the Wildcats are first in the classroom, according to the “Academic BCS,” the New America Foundation’s annual academic performance rankings of the top-25 college football teams.

Northwestern’s top finish is not surprising. But the New America Foundation’s second-best academic team, Northern Illinois — which finished ahead of schools like Notre Dame, which will play for the national championship on Jan. 7 against Alabama, and Stanford — is a more curious case. The Huskies, who earned a bid to the Jan. 1 Orange Bowl, are a surprise both on and off the field.

There's a lot to parse in that paragraph: best left for another day.
Posted by Stephen Karlson at 23:40