The Northern Illinois football team is above the line in the coaches' poll.


Northern Illinois' earliest appearance in the Top 25 came in 2003 when the Huskies were ranked 20th (AP) and 22nd (USA Today) in Week 5 after defeating No. 21 Maryland, Tennessee Tech, No. 23 Alabama and Iowa State. NIU spent a school record eight weeks in the Top 25 that season and reached a record-high ranking of No. 12 (AP) and 14 (USA Today).

That run included two games at home, the season opener hosting Maryland, and the Tennessee Tech game. The only home game so far was a very good Eastern Illinois, in DeKalb a week ago.

The other three wins came on the road, the most recent in West Lafayette.  Two Big Ten teams and a state flagship (Idaho), none of them ranked. 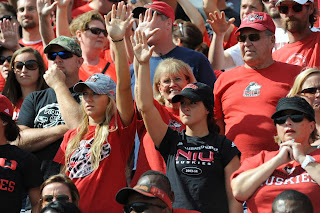 By then, most of the people remaining in the stadium were in red.
Posted by Stephen Karlson at 23:10