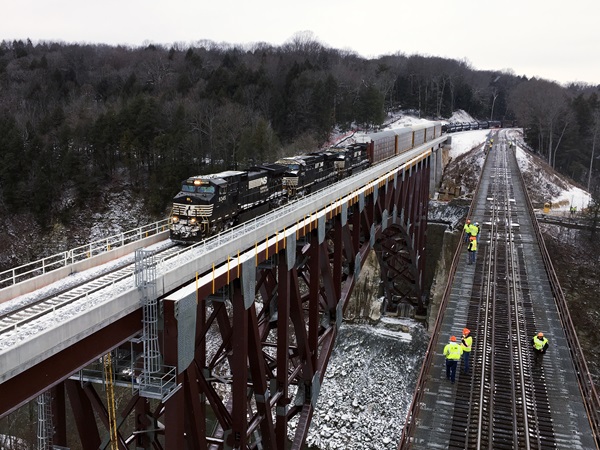 The new span, built 75 feet south of the old truss bridge, allows NS to run industry-standard 286,000-lb. cars over the Southern Tier line, up from the current 273,000-pound limit. Trains can move across the bridge at 30 mph, up from 10 mph on the old span.

The line carries about a dozen trains per day and is a key link in Norfolk Southern’s route to New England from the west. It also handles some freight bound for Canada and northern New Jersey.


The bridge was funded through a public-private partnership among Norfolk Southern, the New York State Department of Transportation, and the Federal Highway Administration.

At 2:20 p.m. Monday, Norfolk Southern’s 36T, an eastbound merchandise train running from Buffalo to Allentown, Pa., with stops in Corning and Binghamton, N.Y., became the first to run across the new bridge.

“This is a very exciting day for Norfolk Southern and for the future of freight rail service in New York’s Southern Tier region,” said James A. Squires, NS chairman, president and chief executive “The successful completion of this bridge is an excellent demonstration of how the public and private sectors can work together on freight transportation projects that generate significant public benefits and are vital to U.S. commerce. It’s also a testament to Norfolk Southern’s robust bridge program and the ingenuity of engineers and railroaders.”

“The new Portageville Bridge complements the beauty of Letchworth State Park while providing safer, more efficient freight rail service,” said New York Gov. Andrew M. Cuomo. “Through a combined effort with Norfolk Southern, government leaders and the public, we have built a modern arch bridge which will support economic growth in the region and continue our drive to strengthen and modernize transportation infrastructure across the state for generations to come.”

The old bridge will be removed. As the railroad passes through a state park, and ferroequinologists have been taking pictures of trains here for years, local authorities are looking forward to enhanced tourism and recreational activities on the river.  "The bridge’s arch design minimizes the railroad’s environmental footprint in the Genesee River Gorge and complements the scenic vistas found in Letchworth State Park."
Posted by Stephen Karlson at 15:56