At the start of the season, the football pundits thought The Green Bay Packers would be the team to beat in the National Conference, with a deep corps of receivers and all the starters on the offensive line returning.

Last night, several of those receivers and a quorum of the offensive line were in sweats.  And the Detroit Lions were pushing the defense all over the field.  Midway through the third quarter, the Lions were leading 20 - 0.  (You have to go back to sometime in the first Obama term to find the Packers shut out in the first half.) Then the defense roused itself.


Angry, stunned and a touch embarrassed, the defense rebooted as the game began anew in the second quarter. On three consecutive possessions the Packers forced three-and-outs, holding the Lions to 4 yards, minus-5 yards and 0 yards, respectively. On a fourth possession they ushered Stafford to the sideline after just four total plays.

In getting off the field efficiently the defense gifted Rodgers, who played behind an offensive line minus four starters at one point, myriad opportunities to jump-start a stagnant unit whose biggest gains, at times, came via pass interference penalties. A fluky touchdown from Randall Cobb, who recovered a forward fumble by running back James Starks, finally put the Packers on the scoreboard with 5 minutes, 44 seconds remaining in the third quarter.

There's still a long way to go, and it helps to get the offense back on the field.


What followed moments later was the play that cornerback Casey Hayward labeled the most important of the entire game, even juxtaposed with the parabolic hoist from Rodgers. It happened on the first play from scrimmage after Cobb's touchdown, with the Lions seeking to mount a drive that would reclaim a chunk of momentum lost.

On first and 10 from the 20-yard line, Peppers turned the corner on tackle Riley Reiff and zeroed in on the throwing arm of Stafford. For the umpteenth time in his career Peppers knocked the ball free, and linebacker Jake Ryan recovered.

Four snaps later, Rodgers slung a pass over the middle to receiver Davante Adams for an 8-yard touchdown. Lions 20, Packers 14.

"It just turned the game around right then," Hayward said. "...I think it gave the whole team energy. That's what we didn't play with in the first quarter — energy."

Twice more the defense forced punts in the fourth quarter, including the crucial one with 29 seconds remaining. It handed Rodgers the ball on his own 21-yard line with no timeouts — but still a final chance.


With no timeouts left, Rodgers set up for a Hail Mary play that the team practices regularly and tried to direct everyone into position. There were four receivers and a tight end in the game and three of them were to the left and two to the right.

"We were running around like rabbits before the play call," [receiver Randall] Cobb said. "It is (a called play), but not out of the personnel we were in. We just winged it."

On the left was wide receiver Jared Abbrederis closest to the sideline, [Davante] Adams next in line and Cobb in the near slot. On the right was receiver James Jones wide right and Richard Rodgers in the slot.

The Lions lined up with seven defensive backs and a linebacker, but they didn't put their best Hail Mary defender, 6-foot-5, 237-pound receiver Calvin Johnson, on the field because they thought the Packers were going to run one of those crazy lateral plays.

Rodgers directed Adams from the left to the right just behind Richard Rodgers.

Rodgers to Rodgers, for the win.  And the stars might have been aligning. 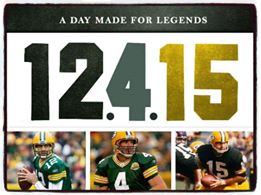 And so the stretch drive begins.
Posted by Stephen Karlson at 10:03