I HEAR YOU WENT UP TO SARATOGA. The Boston connection to the Lake Shore had an extra car, the former Port of Vancouver, a Great Northern Railway parlor-observation once used on the Seattle - Vancouver Internationals, now running as City of Spokane, on the hind end on July 29. (The Boston extension of the Lake Shore also had this car on July 22, although conditions were not conducive to photography that day). 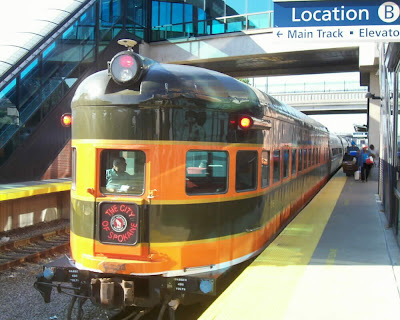 The car was still sitting in the Albany yard when 49 departed, on time, for Chicago. Sleeper passengers are served dinner at Albany. My tablemates were speculating on whether the car was carrying passengers for the races. Possible, but unlikely. The Boston train arrives in Albany just before the evening Rutland train, which would go to Saratoga, although that train arrived and left with no effort of a switcher to cut the car off 449 and add it to that train. The Montreal to New York train and an Empire Service train also showed up at Albany, and, once again, the limitations of the new Albany station were evident. If somebody at Amtrak or the New York Department of Transportation ever got serious about tightening the schedules and providing connections, there wouldn't be space in the station for the trains or for the passengers.

The potential is there. The Boston train arrives in time for a passenger to ride Springfield to Saratoga or Pittsfield to Rutland, if the passenger is patient (drive time, even with a refreshment stop someplace, is faster even though those journeys are the long way around on the interstates). The reverse connection is available, although with a LOOOOONG layover in Rensselaer (the downside of Albany-Rensselaer is it's distance from urban amenities, perhaps what Penn Central had in mind when it moved out of the Albany station). A passenger intending to ride the rails from Montreal to Chicago and points west also has the option (there no longer being any kind of cross-border connection Detroit - Windsor or Port Huron - Sarnia) of connecting in Albany, but the reverse connection is not available (the best one can do is to transfer to the Maple Leaf in Buffalo and spend the night in Toronto as the overnight Cavalier is long gone from the timetable). If I had the power to send Amtrak administrators to detention, I'd make the miscreants write "The value of a passenger service is in the intermediate community pairs that can be served directly or with reliable and rapid connections by multiple trains" a hundred times or so.

I've turned up a few other weblog train reports. Here's a recent ride from Detroit to Chicago with the tease of a continuation to St. Louis ("The value of a passenger service ...") and an installment of a ride on the California Zephyr.

Posted by Stephen Karlson at 22:56