THE SHROUD OF TURIN. The Overhead Wire offers a challenge to foes of light rail transit whose objection is to the visual pollution of the catenary. The picture is from the light rail lines of Turin, Italy.

It's called, spot the wires. Sure are ruining this nature scene for everyone!

One of the comments to the posts recalls a complaint I saw somewhere, possibly in the print version of The New Electric Railway Journal, about the propensity of light rail systems to install heavy catenary as if a Japanese bullet train or a GG-1 was going to roll into National City or South Hills.

Directly-suspended trolley wire, however, was standard practice on U. S. streetcar lines. Herewith the West Allis branch of Route 10 in Milwaukee, with an inbound car about to cross Blue Mound Road. The car is on what was once the interurban line into Milwaukee, and Miller Park will someday be constructed behind the photographer's right shoulder. 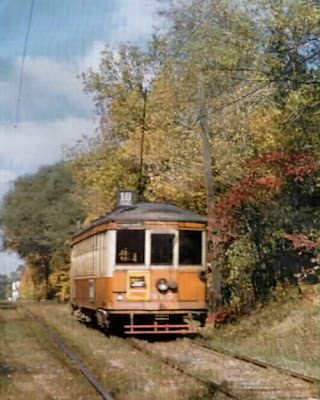 But directly suspended trolley wire need not mean urban boulevard lines operating at low speeds, as in Turin, or on those bits of Route 10 that ran alongside the Menomonee River Parkway in Wauwatosa or at roadside and on the old interurban route in West Allis. 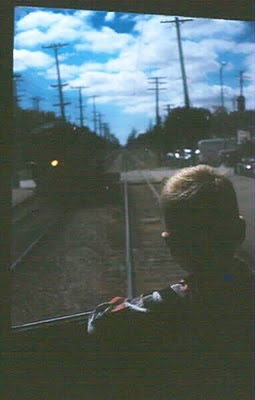 We are at Racine, Wisconsin, in the fall of 1958. This is a particularly difficult part of the North Shore Line, as it is uphill both ways out of Racine station, and the nearest substations, at some distance, will be straining as a 'Liner and three heavy steels get under way at the same time.
Posted by Stephen Karlson at 22:41