NIKOLA TESLA DROOLFEST. Virginia Postrel focuses on the aesthetics of cordless lamps illuminated from a central power station. The research making such accessories possible recognizes the influence of Nikola Tesla.

The concept of sending power wirelessly isn't new, but its wide-scale use has been dismissed as inefficient because electromagnetic energy generated by the charging device would radiate in all directions.

Last fall, though, MIT physics professor Marin Soljacic (pronounced soul-ya-CHEECH) explained how to do the power transfer with specially tuned waves. The key is to get the charging device and a gadget to resonate at the same frequency _ allowing them to efficiently exchange energy.

It's similar to how an opera star can break a wine glass that happens to resonate at the same frequency as her voice. In fact, the concept is so basic in physics that inventor Nikola Tesla sought a century ago to build a huge tower on Long Island that would wirelessly beam power along with communications. 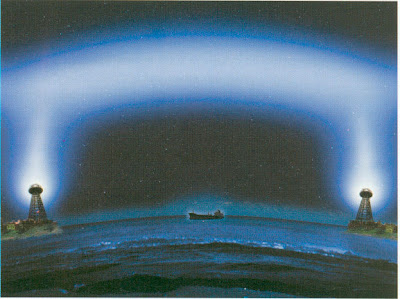 The MIT system is about 40 percent to 45 percent efficient _ meaning that most of the energy from the charging device doesn't make it to the light bulb. Soljacic believes it needs to become twice as efficient to be on par with the old-fashioned way portable gadgets get their batteries charged.

Also, the copper coils that relay the power are almost 2 feet wide for now _ too big to be feasible for, say, laptops. And the 7-foot range of this wireless handoff could be increased _ presumably so that one charging device could automatically power all the gadgets in a room.

Those power sources have that Tesla look about them, although one wonders whether the aesthetes will approve of its design. 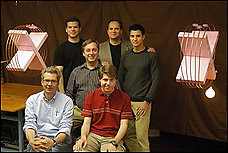 Massachusetts Institute of Technology photograph from Washington Post.
If one is not too concerned about collateral damage to electronic equipment, one can use a science-fair Tesla coil to illuminate fluorescent lights, including the compacts, by wireless induction.
Posted by Stephen Karlson at 23:42