The Chicago and Eastern Illinois Railroad provided a Chicago connection for Louisville and Nashville passenger trains to New Orleans, Atlanta, and Florida destinations.  For a time, the carrier also offered its own passenger train between Chicago and St. Louis.  This service included a day train called The Zipper (connecting downstate with a motor train called The Egyptian Zipper to Thebes) and a night train called Silent Knight.  These trains all vanished with the coming of Amtrak, although Amtrak's Floridian returned to C&EI rails, missing Louisville,  for a few months in 1974 and 1975.

Thus, when Amtrak and Union Pacific have engineering work on the Alton Route through Bloomington and Springfield, there is a detour route available for passenger trains.  Typically the Texas Eagle for beyond St. Louis detours, with the St. Louis corridor trains turning at Springfield, or replaced by buses.

This spring, there have been several such detours, often announced well-in-advance, as improvements on the Alton to make possible 110 mph operation proceed.  One such detour took place just after the end of the academic year, and I took advantage of the information to secure sleeper space to Longview, Texas, which seemed like a good place to spend a day and turn back.

A rider with a greater taste for adventure can attempt a turnback in Dallas, although there's not much time in town between trains, and the margin for error in case of trains running late is too small.  Another possibility is to ride the detour only, with an overnight in St. Louis, or create a Chicago - St. Louis - Kansas City - Chicago circle tour out of it, with ample time for sightseeing or dining in either St. Louis or Kansas City (the trains aren't frequent enough to create blocks of time during business hours in both cities.)  In October, 2010, rail enthusiasts Otto Dobnick, Dave Ingles, and Rick Moser did the St. Louis turn on a previous announced detour.  Their trip log is amply illustrated.

An Amtrak detour has ample potential for adventure, simply because of the day-to-day challenges (which also affect freight trains) of getting a train from Chicago's Union Station to the operating railroad.  My use of the locution "Chicago area" reflects those challenges.  Amtrak dispatchers regularly use backward induction to get a train out of Chicago, first asking the CSX or CNR or Norfolk Southern dispatcher if he'll take a train; upon getting that commitment telling the dispatcher of the line connecting to CSX or CNR or NS that the train will be able to move to that line; then work backward in like manner until the line connecting to Union Station has accepted the train, and then the train moves on time.  When the dispatchers haven't worked together in that manner, trains can wait, and wait, and wait, as was my experience in the summer of 2001 when a Cardinal headed for Washington, D.C. was held off the CSX line to Indianapolis until the dispatcher could find a path for it. 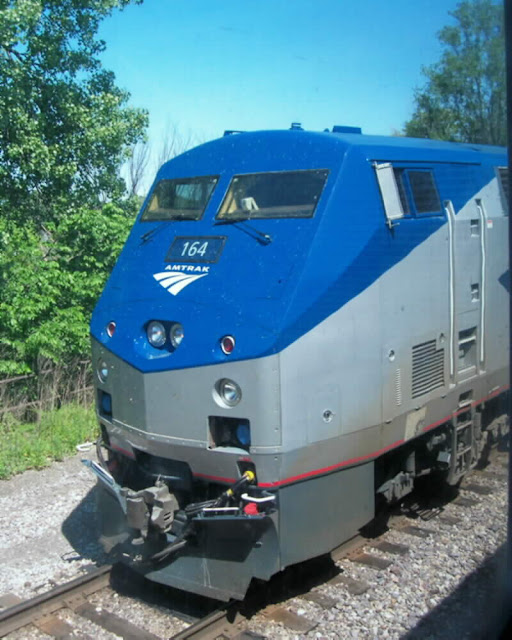 I made mention of a buffeteria car.  That's a Milwaukee Road locution.  Amtrak calls its reconfigured dining cars "Cross Country Cafe" cars, and one such car served as the dining car on this night's 21. 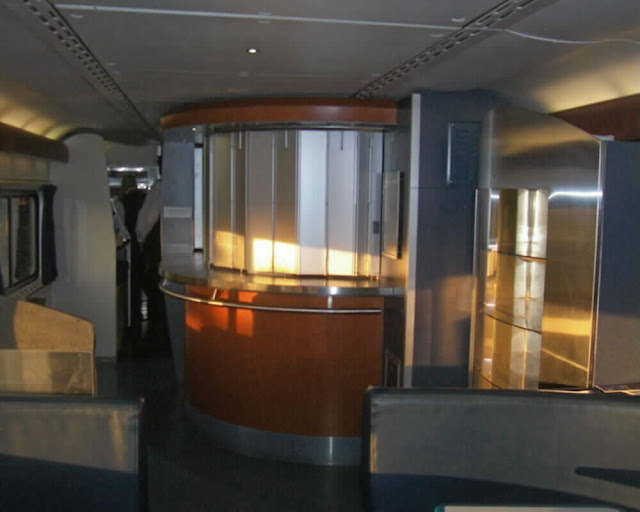 One end is set up as a self-service area and an attended buffet.  The other end is set up as a diner, and there are apparently different configurations of these cars.  The point of this configuration is either to offer a dining service with a smaller crew, as is being done on this run, or to offer an economy food service out of the buffeteria.  Despite the economy setup, the diner offers a deluxe menu, with steaks grilled to order, or lamb shanks, or chicken, or a few other items, and apart from the vegetarian special, patrons can choose either potatoes or rice.  Fewer people are served at each seating than is possible with a fully-staffed Superliner diner, although we will see the carrier introducing other economies, including seating in half the diner, in subsequent reports.  Out of view to the left is the table commandeered by the crew for their mobile office.  There has to be a better way of providing crews with a work space than a practice that gives lounge patrons the impression that the train exists for the benefit of the crew.

Pass Findlay (where the Egyptian Zipper used to connect with the Zipper) 6.12, pass Pana (which used to be where the C&EI used New York Central double track into St. Louis, and the crossing of the Illinois Central Charter Line) 6.34, meet eastbound stacks Hillsboro 7.03, Vierling Junction 7.50, Venice 8.10, arrive St. Louis 8.31. 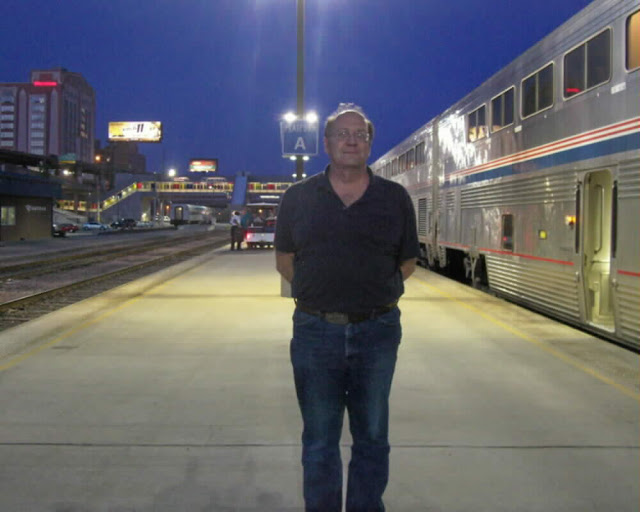 The hotel and assorted other buildings block any view of the Gateway Arch.  There's time for a stroll, and for smokers to smoke, and the locomotive to be fueled and the southbound passengers to board.  Leave St. Louis 8.55, room made down, shower at Texarkana 6.30 on the 17th, pass Atlanta 7.10, protracted station work at Marshall hand-throwing switches, recrewing, then taking passengers, leave 8.14, arrive Longview 8.39, almost on time. 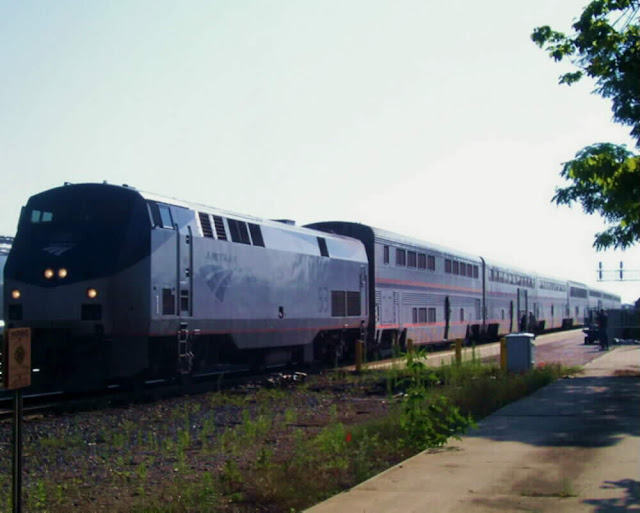 Longview is where the Amtrak passenger destined for Houston or for Shreveport changes to a bus.  There's more to say about Longview, and about the value of connectivity among the long-distance Amtrak trains, to come.
Posted by Stephen Karlson at 16:58