Saturday offered a properly brisk day for a college football game.  The Northern Illinois University run continues, to a well-attended, if not sold-out stadium. 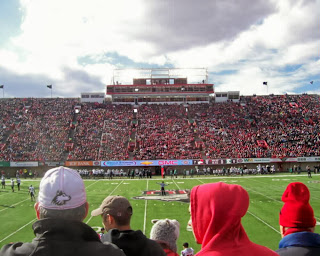 It's been a difficult two weeks for Eastern Michigan, beginning with the murder, possibly involving a robbery, of receiver Demarius Reed at his Ypsilanti apartment.  The game went on as scheduled.  Four different Northern Illinois players threw touchdown passes in the convincing win.  Starting quarterback Jordan Lynch threw for two touchdowns, ran for one, and caught a pass from Tommylee Lewis for another.  The most instructive highlight, however, involved reserve quarterback Matt McIntosh on a third quarter touchdown pass to Matt Williams.

That's not the canonical Bart Starr special, coming as it does on first down, but it illustrates one way to keep a defense honest.  The play starts with a man in motion right to left, often a tell of a fly sweep or jet sweep.  (The timing of the jet sweep involves the snap of the ball with just enough time for the quarterback to hand off, which suggests some trickery decoying aggressive defenders into an encroachment).  The defense has to respect the run, giving the receiver space to get behind the coverage for a well-timed pass.

Huskie Wire commentator Steve Nitz enjoys the moment. "Illinois and Northwestern are a combined 0-7 in Big Ten competition, while the Huskies are 2-0 against the Big Ten."  That's 2-0 against Iowa and Purdue.  Lining up regularly against Wisconsin, Michigan, and Ohio State is another matter.

It's fun and good for the local morale nonetheless.  Unfortunately, we've seen the last Saturday home game for the year.  The November home games will be in the evening, one of them concluding the inauguration festivities for new president Douglas Baker.
Posted by Stephen Karlson at 23:02