Over the first weekend in May, the burghers of Springfield, Illinois honored a favorite son with a sesquicentennial re-enactment of President Lincoln's funeral. 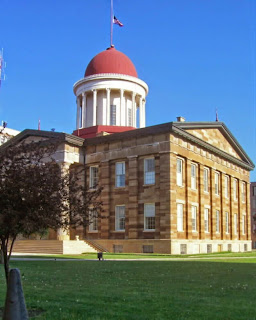 That's a proper 36 star flag atop the Old State House, which provided the background for Senator Obama's declaration to seek the presidency. 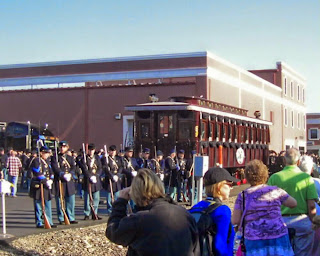 This replica of official car United States came to trackside by truck.  At one time, builder David Kloke had hopes of re-enacting the funeral train's path from Washington City to Springfield, but funds and the reluctance of the freight railroads to provide a path for a 25 mph steam train precluded that.  The inside of the car, intended as a presidential salon, is ornate in what became the Gilded Age fashion.

But before the ceremony could commence, more modern conveyances had to go about their work.  The second morning departure for Chicago turned up a few minutes late.  Passengers had been alerted to the presence of crowds at the station. 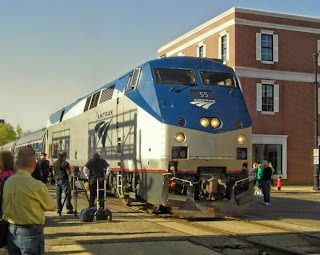 That's the same rake of coaches I rode to Springfield the previous evening.  Busy corridor, end of the school year at en-route communities, three coaches and the business class cafe.  There's still potential to run longer and more frequent formations, but a lot of work first.

People referred to the station President Lincoln's family returned to as the "Alton" depot.  The former Chicago and Alton and Gulf, Mobile and Ohio is now Union Pacific property, and there were empty frac sand hoppers to return north. 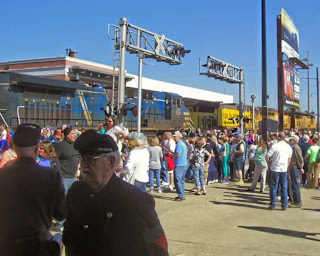 Six motors, including this leased unit.  Then the bands, honor guards, and mourners could proceed with the ceremony. 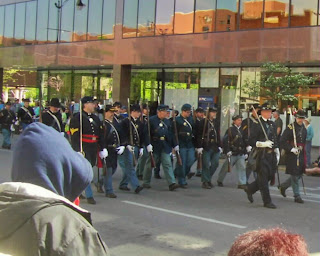 Several regiments marched, as did a delegation of Masons. 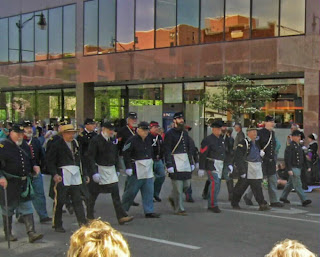 Masonic funeral trappings are very much the same today.

It became a hot day, and the re-enactors who provided a guard in their authentic wool uniforms authentically sweated. 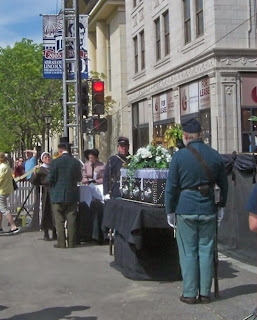 Perhaps the only place to see a Sister in a habit is at a re-enactment.  I didn't inquire.  (Pardon me, ma'am, do you belong to an order?)  There was also at least one clergyman in period robes.

In the original event, the final vigil was in the House chamber of the State House.  The re-enactment vigil went to sunset, at which time all was put away until mid-morning Sunday.

I was on the 8.37 departure for Chicago, which featured the same motors and some of the same coaches as the train we saw on Saturday. 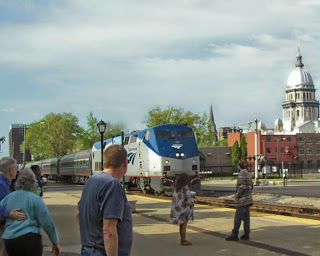 That's the 1870s Capitol in the background.  Four coaches and the cafe car.  I rode business class both ways.  On the one hand, it's exhilarating to buzz past the traffic on Interstate 55 and the remnants of Route 66 at speeds up to 110 mph; on the other hand, the track work at Joliet and the delays attendant to trains running out of course on what is still a single-track railroad defeat all that the fast running does.  The train was off Springfield on time, and about an hour late into Chicago, much of that delay attributable to the work at Joliet.
Posted by Stephen Karlson at 23:54