A sheriff's sale, four years ago, didn't go too well.

The view from Cold Spring Shops headquarters looks good enough, but inland to the west are the vacant lots. 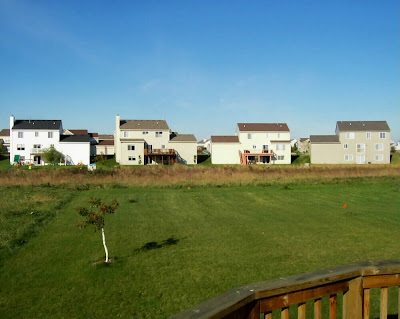 Nine years later (there are now trees almost worthy of the label shade tree out here) those vacant lots might be filled in.


Fort Worth, Texas-based D.R. Horton Homes broke ground Wednesday on the first of several homes planned for lots the company controls in the Devonaire Farms subdivision, according to a news release from the city.

Devonaire Farms, located off Malta Road, was approved in 2003. After the housing market collapse, almost half the project was left incomplete, according to the news release.

The problem confronting city officials is that inducing construction, in the face of a weak Illinois economy and the human capital moving to neighboring states, might be contributing to a suburban growth Ponzi scheme.


DeKalb has made numerous efforts to spur housing development. Last year, the City Council approved waiving water impact fees for the first 100 construction permits in subdivisions including Devonaire. These incentives for the 250 eligible lots would range from about $2,600 to $3,800 for a single-family property.

Bad news: the aquifer is already stressed, and DeKalb is too far from the Chicago sanitary canal to even think about sticking a straw into Lake Michigan.
Posted by Stephen Karlson at 13:37