THE COLORFUL RAILS OF FLORIDA.

Florida's new Brightline service will be rolling out four trains, each a rake of four carriages with a power car on each end.  The first two trains will be called BrightBlue and BrightPink (maybe the North Shore Line first conceived of an ElectroLiner, which makes the jamming together of separate words no less barbarous, but I digress.)  The next two trains will be BrightGreen and BrightOrange. 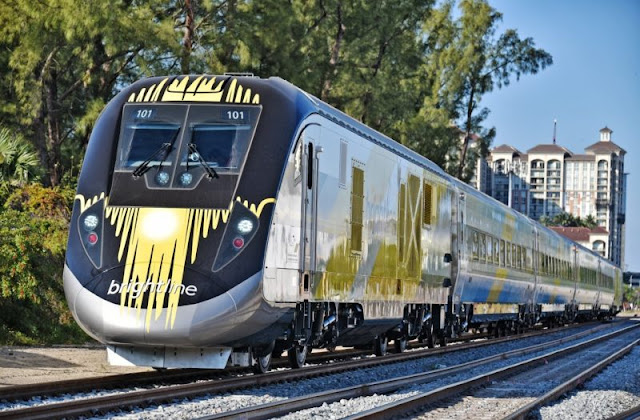 That appears to be the Blue set, which is already being tested in Florida.  As all trains are running on the same track, the color coding provides no additional cues as to destination (e.g. the red cars go to Harvard and the green cars go to Fenway Park).  Perhaps the operators will in future notice the coloration of Seaboard Air Line's old Orange Blossom Special diesels, where it would be easy enough to work the pink in with the green, blue, and orange on the units as delivered.  It's probably too much to ask for power cars that look more like those diesels.
Posted by Stephen Karlson at 14:24