REDISCOVERING HOMECOMING. There have been a number of changes in the Milwaukee school system over the past three decades, including the effects of desegregation, deindustrialization, immigration, open transfers, and a modicum of school choice. But sometimes things turn full circle. Among the changes that took place at Milwaukee Hamilton was the disestablishment of the band, as in closed, gone, instruments sent as surplus property to other schools. But it appears that the current administration has decided in favor of operating a standard-issue high school. There is still enough parent and student interest in football, for instance, for the school to have the highest attendance in the city (still not up to suburban levels, let alone the kind of interest one sees in the smaller towns of the North West Frontier, but progress in that direction.) 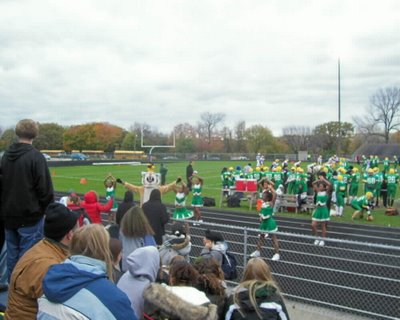 The band director asked the president of the alumni association for the words and music to the traditional fight song.

We're rarin' to go
Ready to show
Hamilton is the greatest school we know
So come on kids, and make the scene,
Get out there and fight that team!
We'll yell a little, shout a little, jump a little, cheer a little,
Hamilton High, let's get out and win! 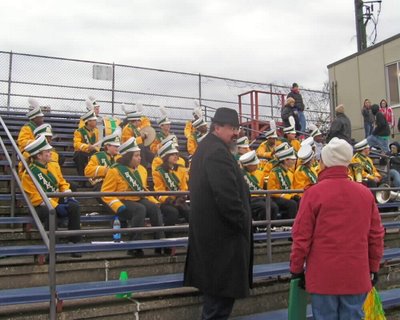 Despite a few logistical difficulties, some instruments have been located to provide a pep band in the stands. Some of the players in uniform are reserves.

RUNNING EXTRA: In light of last weekend's brawl in Miami and one weblogger's discovery of a cohort of 17 year old ninth graders in the Milwaukee public schools, I'm motivated to mention two salient points. Hamilton won the game, and after the game the players queued at midfield, to pass starboard-to-starboard and shake hands. I have not yet tamed the digital camera to be able to take long shots after dark.
Posted by Stephen Karlson at 20:36