GIVE THEM FREE REIN TO 110. I've been making the case for faster conventional trains in the Midwest, and they might happen.

Illinois, Michigan and Wisconsin are working with Amtrak to increase train speeds from the 79 m.p.h. top speed in most locations to 110 m.p.h., which is the maximum that can be safely handled by Amtrak's existing locomotives and coaches. Speeds higher than that would require elaborate barriers to prevent accidents between trains and vehicles at railroad crossings.

The cost-effective policy might involve more grade separations, although such projects can be more effective than barriers. (On the other hand, Britain's East Coast Main Line still has a few occupation crossings, with a telephone to obtain permission to herd sheep across the tracks. These crossings also provide stiles for pedestrians to cross the right-of-way-fence.)

"Imagine," Obama said Thursday, "boarding a train, in the center of a city, no racing to an airport and across a terminal, no delays, no sitting on the tarmac, no lost luggage, no taking off your shoes."

"Imagine," he said, "whisking through towns at speeds over 100 miles an hour, walking only a few steps to public transportation, and ending up just blocks from your destination."

Mr President, do you really want to imagine the Depression era? 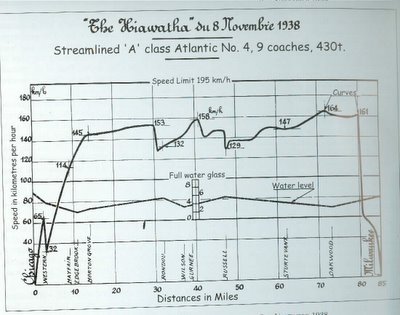 The context for the chart is here. In 1938, a passenger detraining in Milwaukee could walk a few steps to the Public Service Building and board a car for Waukesha or Soldiers Home or, for a few more months, East Troy, destinations not served directly by The Milwaukee Road.

What [President] Obama outlined on Thursday isn't quite so exciting. The government will distribute $8 billion to develop 10 high-speed rail systems around the country. Chicago would be one hub. In Illinois, we'll be lucky to speed the trains up to 110 miles per hour, which is slower than European and Japanese fast trains.

On one hand, that's a lot of money to restore train timings that were routine in the Steam Era. On the other hand, faster and more frequent trains will build ridership, particularly if the money devoted to roads goes to in-kind rebuilds of the existing roads, rather than adding road capacity. (In-kind rebuilds mean subjecting drivers to construction-season congestion that reverts to non-construction-season congestion when the rebuilds are done.)

Closer to DeKalb, the passenger rail possibilities include a day train through Belvidere, Rockport, Freeport, and Galena to Dubuque. That restores a passenger train to the Galena and Chicago Union (Chicago's first railroad) although it requires the cooperation of the passenger-hostile Union Pacific.

The project languished until earlier this year, when the federal stimulus package — known as the American Recovery and Reinvestment Act — passed with money for Amtrak projects. Meanwhile, Gov. Pat Quinn made a push for a long-delayed state capital plan that could come together this summer.

It’ll take two construction seasons to get the rails ready, and at least that long for Amtrak to refurbish old cars to put on the new route, something that’s also being funded by the stimulus package.

I'm uneasy about calling these projects economic stimulus. They're capital investments, possibly with benefit-cost ratios greater than one, and a proper accounting for public borrowing would create assests to offset the liabilities implied by the government bonds. I'd also like to see a new fleet of day coaches -- perhaps these -- to supplement the Amfleet and Horizon cars. The oldest Amcoaches are older now than the newest legacy coaches that Amtrak bought in 1971-1972 were.

The Belvidere routing sends the trains further away from DeKalb and Sycamore. The historic routing to Dubuque passed through Genoa.

"We're not funding it so if the federal government feels it's better to go in another direction, what more can I say?" [Genoa mayor Todd] Walker said. He also said that it was hard to gauge community support for the project.

There is a preference revelation problem here, in that residents might be more favorably disposed to having train service if somebody else pays for it (the national government, holders of Illinois bonds) although they might not act on that disposition by riding the trains. Something like that might be bothering Reason's Nick Gillespie.

If you're the president of the United States and you're talking about goddamn traffic jams and you're proposing high-speed rail as anything other than an unapologetic boondoggle that will a) never get built and b) never get built to the gee-whiz specs it's supposed and c) be ridden by fewer people than commuted by zeppelin last year, you've got real problems, bub. And by extension, so do we all.

Reality checks. First, never mind the gee-whiz specs. Give the existing trains free rein to 110. Increase the frequencies. Provide reliable connectivity. In Chicago, the hourly commuter trains on Saturdays now routinely offer six car consists, all cars working, all cars comfortably full, in part because if the expressway congestion doesn't get you, twenty bucks to park for the first half hour will. (Yes, that's routine on Saturdays. At summer peaks, Burlington and North Western services regularly offer relief trains, often on faster schedules leaving five minutes ahead of the regular train, making their first stop fifteen to twenty miles down the line.)

I continue to endorse these high-speed rail plans, but the Sprecher stays in the cooler until the cartel-era speed restrictions are repealed and the track upgrading begins.

The Sprecher is still in the cooler.

Posted by Stephen Karlson at 22:09