THE FOLLIES OF CULTURE STUDIES.

July is usually the month in which a lot of summer research projects hit the journals (ah, the sweet joy of being able to mark off on any request that doesn't Really Excite Me).  These days, part of establishing your reputation is getting your work into more public fora by way of the internet.  And the Reverend Awdry stories are just more material for the mill.  Thus, the resignation of the actor who does Thomas the Tank Engine's voice gives one Tracy Van Slyke the chance to ring all the identity politics changes.  "But if you look through the steam rising up from the coal-powered train stacks, you realize that the pretty puffs of smoke are concealing some pretty twisted, anachronistic messages." Derivative scholarship.  Some years ago, some other critic got all worked up about Tootle, being advised to Stay on the Tracks and Always Stop for a Red Flag Waving.  Yeah, going off the rails and disregarding all the danger warnings works real well, doesn't it?

Here's a corrective from Charles Cooke at National Review.


This is not adult literature, and nor is it a lecture at Berkeley. It is a series of stories aimed at young children, who need to rebel and to play, but who also need – indeed, who crave  – rules. Hatt is not capricious or mean or violent. He doesn’t cheat or steal, or abuse his engines. He’s just in charge of the railway, as parents are in charge of their kids. If there is any lesson to be taken from his personality, it is that those in a position of responsibility can often be inadvertently amusing. Awdry himself considered the character to be something of a parody of “‘pompous railway officials” who “gave out plenty of orders, but never actually did anything.”

For the adult literature, or perhaps for those Berkeley workshops, I recommend Harry Bedwell or E. S. Dellinger.  There, the pompous railway official's errors can lead to the death of a good man.

And what would Ms Van Slyke make of Thomas on American metals being subject to the dictates of the Federal Railroad Administration? 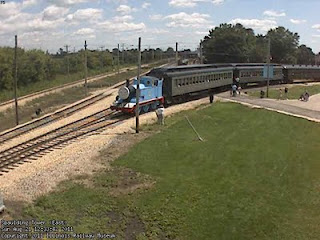