There's nothing quite like the Burlington Raceway for mixing commuter trains and hot intermodals. 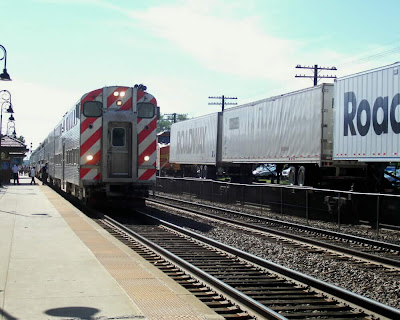 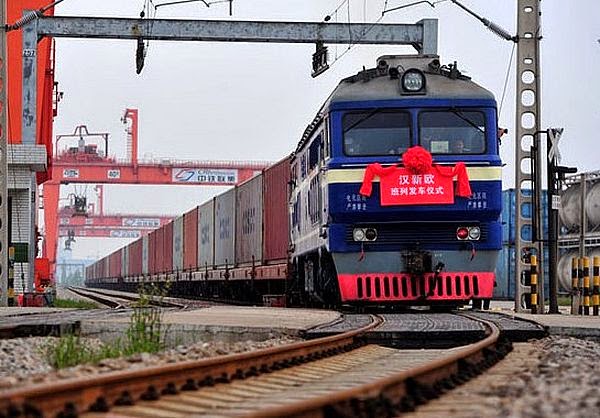 Because of that Russian broad gauge across the steppes, containers are currently transloaded.  (That's often the case at Chicago, as breaking up container trains for interchange and waiting for clearance at junctions is more work than simply unloading and reloading fixed formations of well cars.)


Currently all rail freight traffic between China and Europe must cross two changes in track-gauge, one at China’s border with the former USSR, such as Russia or Uzbekistan or Kazakhstan, then once more at either the Belorussian or Ukrainian borders with eastern Europe. The two breaks of track-gauge as well as differences in the train couplers, brake systems and safety systems of the rolling stock in these three regions generally mean that the rolling stock and locomotives do not transit these gauge breaks between China and Europe, rather the standardized freight containers and truck trailers on the trains are simply trans-loaded from one train to another train with cranes and container forklift trucks at these border crossings / gauge breaks.

Plans and agreements are forming and being signed to piece together a continuous standard gauge rail corridor between China and Europe, in order to bypass the 1520 mm broad gauge rail lines in Russia, Belarus, Ukraine, Kazakhstan, Uzbekistan and several other former USSR republics in central Asia. The route will run through Turkey, Iran and then across several central Asian countries, possibly including northern regions of Afghanistan to the western border of China, to connect with the existing standard gauge rail network in China. Due to the rather unstable political and ethnic climate in the region spanning from the western frontier areas in China all the way to the Iran – Turkish border – in relative close proximity to the war-torn regions of Iraq and Syria – completion of this rail route is not a certainty.

This proposed rail corridor is often called the “Iron Silk Road,” after the centuries-old horse and foot trails running through what was then the Ottoman Empire, and before that, the Persian Empire for land-based trade between Europe, the Middle East, India and China. In-fact is was the rise and increasing might of the Ottoman Empire, and its growing control over the “Silk Road” during the 15th and 16th centuries, which pushed the powerful European kingdoms of England, Spain, Portugal, Holland and France to seek a western route to China and India via the Atlantic Ocean – as an alternative to the Silk Road – and thus started the European settlement and colonization of the Americas.

We've looked at the current incarnation of the Silk Road Railroad previously.  Where is the Brunel, where is the Hill, to spike together an electrified main line with clearances adequate for double-stacks, and will Sheridan and Earp require successors?
Posted by Stephen Karlson at 13:01