Kurt Schlichter's Indian Country is a warning, inspired by the attempts of the self-styled resistance and the Democrat-Media-Entertainment-Academic Complex's efforts to impose their vision on the country.  "Maybe someday we will realize that the path we are currently on ends in a place that looks a lot like Kosovo...  The people there chose expedience and violence over the hard work of sustaining the rule of law."

Is that the course the United States are on?  Book Review No. 14 will not offer spoilers.  I purchased the paperback edition.  Is its publication in large type with a lot of white space a statement that in future, print editions of books will have in mind the deteriorating eyes of aging Baby Boomers, as everyone younger can still pick up the words on portable screens?

The events of Indian Country take place shortly after the partition of what was the United States, thus serving as a prequel to People's Republic, a prequel that none-the-less allows plenty of opportunity to describe the effects of all sorts of arms and ammunition, as well as to make fun of the pronoun pretensions of the preening progressives running the People's Republic.

But those preening freakazoids of unknown body type, while probably older versions of these future Morale Conditioners from Evergreen College, none-the-less have historical precedent for coming up with the muscle they will deploy in Indiana. 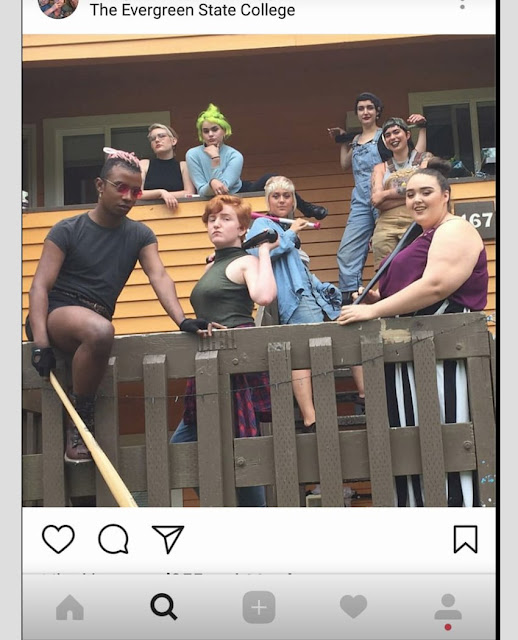 The formula is simple enough:  arm some former felons, tell them they are facing a race and class enemy, condition them to think of that enemy is "deplorable" (an Americanized version of Untermenschen), then turn them loose.

Mr Schlichter suggests that, sales and other interest permitting, there might be additional stories about this partition of the country.  People's Republic has a hint that the principal character might be back at work in the failing part of the country; that the protagonists were able to block two Interstate Highways and get the leaders of Hillaryland to contemplate starvation of the cities suggests another set of possibilities.  That somehow, the nachalstvo in Chicago or on Manhattan or in Washington City or in San Francisco still have their cafes and craft beers also raises possibilities, more along the lines of Roumanians turning on the Ceaucescu clan.

(Cross-posted to 50 Book Challenge.)
Posted by Stephen Karlson at 15:28