Fifty years ago this weekend, trains began running on the Skokie Swift.

The first time Rapid Transit trains came to Dempster Street was in 1925. 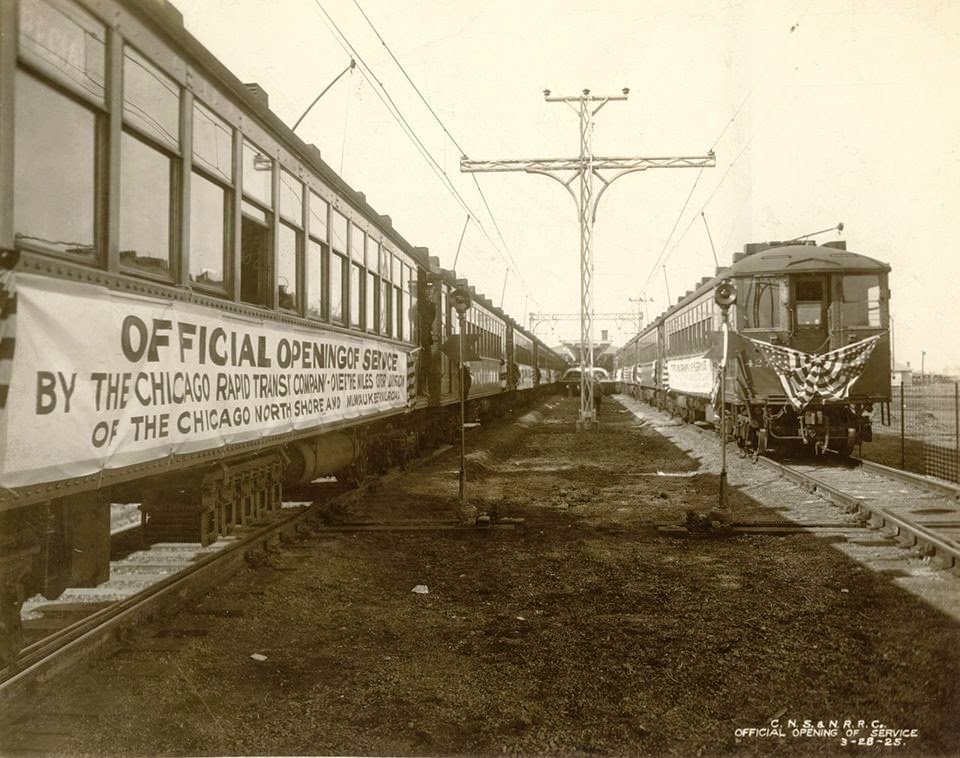 I've shown the history of this Rapid Transit service elsewhere.  At the time of construction, the Rapid Transit and the North Shore Line were affiliated private companies, and the line to Skokie provided connecting tracks to a Rapid Transit repair shop conveniently located alongside a Chicago and North Western line that has since been abandoned, as well as the jumping off place for the North Shore Line's bypass of street running through the wealthy communities along the lakefront.  That bypass might have been the first step toward today's 300 km/h bullet trains.

In 1964 there were not yet Federal capital grants for mass transportation projects, and the Chicago Transit Authority and the Housing and Home Finance Agency together could only swing acquisition and rebuilding of the North Shore Line as far as Dempster Street.  The Authority had done a traffic study in the late 1950s, in contemplation of operating rapid transit trains as far north as Lake-Cook Road, or possibly Great Lakes Naval Training Station.  That study showed relatively light passenger loadings at the stations north of Dempster Street, in part because suburbanization had not filled in the spaces between the towns to the north, in part because the North Shore stations were within convenient driving distances of Milwaukee Road and North Western commuter trains.  Even then, though, the suburban trains became standing room only from Glenview toward Chicago, and traffic volumes on the Edens Expressway south of Dempster anticipated what they are all over Chicagoland these days.

Concurrently with the opening of the Swift, the old Rapid Transit stations between Dempster and Howard were demolished in order to present a cleaner railroad.  The station at Oakton has recently been replaced.  Extension of the Swift north toward Lake-Cook Road or Great Lakes seems unlikely, though, owing first to the North Western buying some of the North Shore's tracks for their own use, and more recently to opposition from the neighbors.

Posted by Stephen Karlson at 17:10