Outbound, on a warm Friday evening just before Labor Day, the destination was Frankfurt.  Suggestion for transatlantic travelers: as of this writing, Lufthansa serve beer with dinner, and noch ein Bier, kostenlos, later.  There's also a transit lounge in Frankfurt, and a lot of travellers destined onward either in Europe or Asia Minor connect there, meaning a relatively quick passage through immigration if your purpose in flying to Frankfurt is to catch a train elsewhere into Germany.

From the sky, the Frankfurt Flughafen Fernbahnhof appears to be almost on the airport grounds.  That appearance can deceive, though, if you're an international traveller first compelled to make the trek from arrival gate to immigration and thence to baggage claim.  Out of baggage claim, however, it's a short schlep to the lobby of the rail station, which includes a service center and passages to the Fernbahnhof, which is a different set of tracks in a different location from the Regiobahnhof, for the dinkies to nearby stations.

A somewhat tired and jet-lagged sixtyish observer is not the most objective judge of the walking distance from lobby to trackside.  It's probably a shorter distance than from the lobby of Mitchell Field to Amtrak's airport station, which is walkable, albeit it's outdoors.  A foot passage from the rail station lobby to trackside includes some ramps, but it's all indoors.

The station itself includes retail, and possibly offices, nearby. 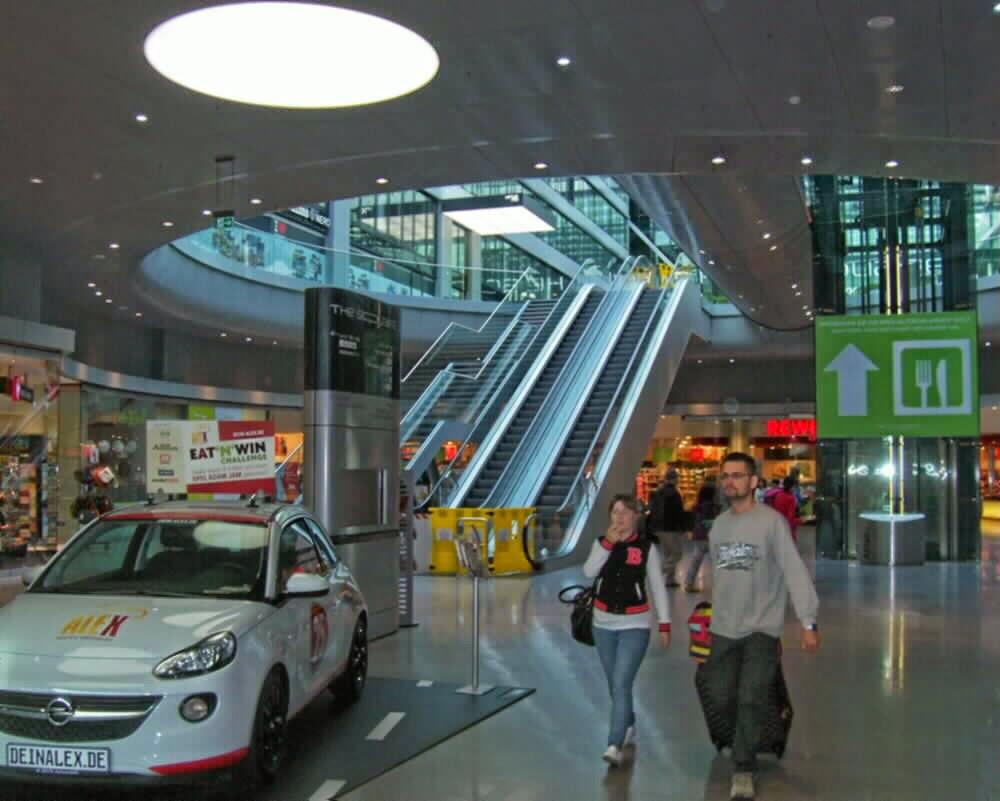 That atrium puts me in mind of the circulating area at New York's Pennsylvania Station, if somewhat tidier, and, as de novo construction, not triggering invidious comparisons with what came before.  I'll let the culture-studies semoticians deconstruct the message of a closed, linear, escalator descending into a round, open space. 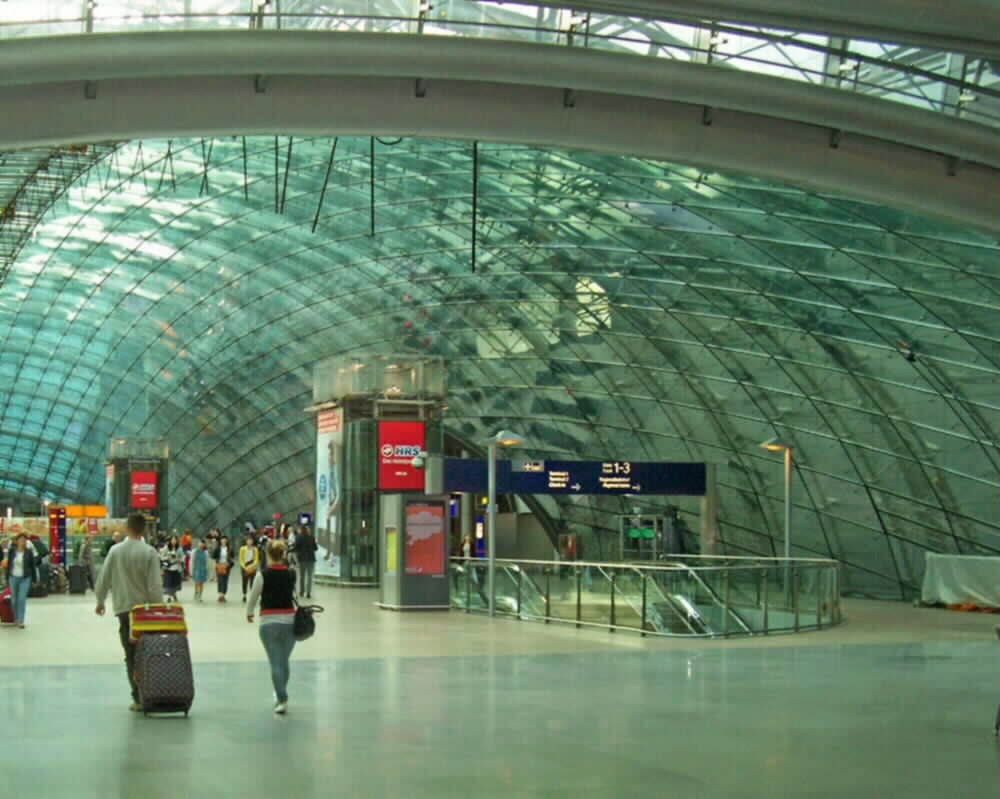 Down the near stairs for Tracks 1 or 3, the stairs out of view to left go to 2 or 4.  Expect train movements in either direction on any track, and some trains reverse here. 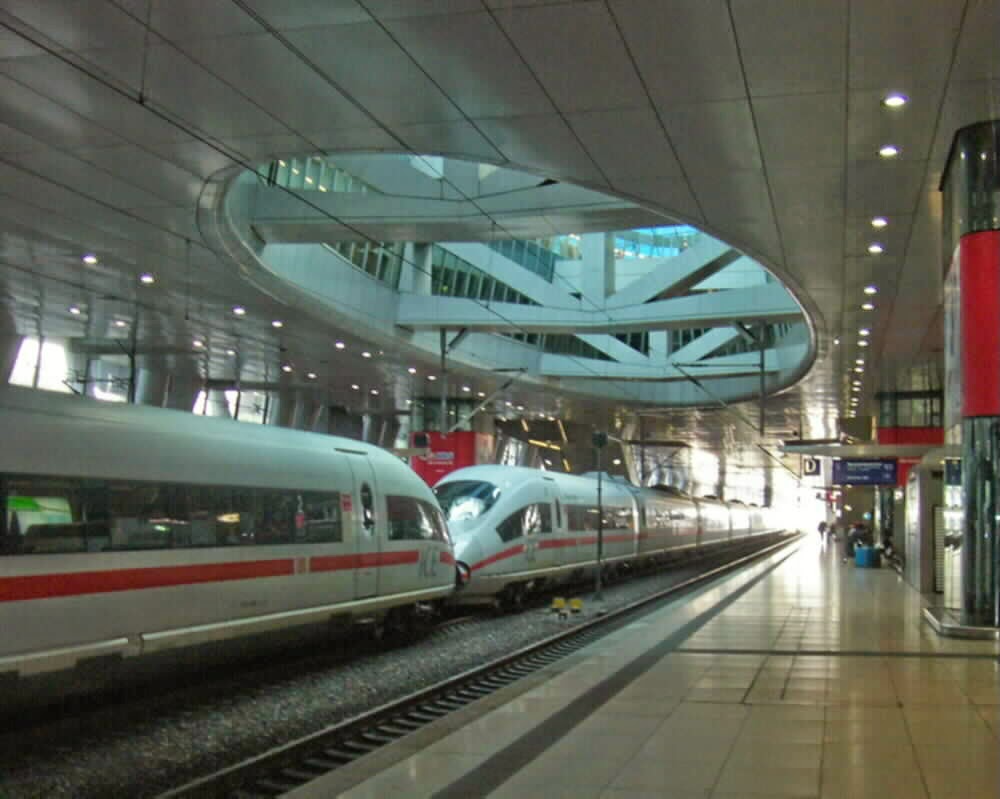 Oval motif repeated to let some light down to the platforms.  We'll see the marshalling of fixed-formation trains with passage limited only to your formation elsewhere.  In many cases, one formation is cut to provide service to destinations on two different lines.  I took the precaution of spending the four euro fifty on seat reservations on all long-distance trips within Germany.  Be alert, though, that formations may not be marshalled in the order depicted on the trackside posters, and when die Zug ist umgedreht, your rights are protected in case you are sitting in the designated coach in the proper seat: the boarding passenger who boarded the expected door for a coach that is elsewhere in the formation has to make the schlep.

My destination this day (Samstag, 30 August) is Nurnberg, and my reservation is on the 0937 (allowing time for coffee and a pretzel before train-time: the German habit of cold-cuts and hard rolls at breakfast, coffee and sweet rolls around 3 pm is one I can adapt easily to).  My reservation is for a seat at a table: model railroaders of varying ages, a lady with the aesthete's eye enroute to Italy, and for part of the trip, two Packer fans.  I get some useful advice on the use of German, including that umgedreht, and the relative merits of analog and digital train control. Train is due Nurnberg at 1159. 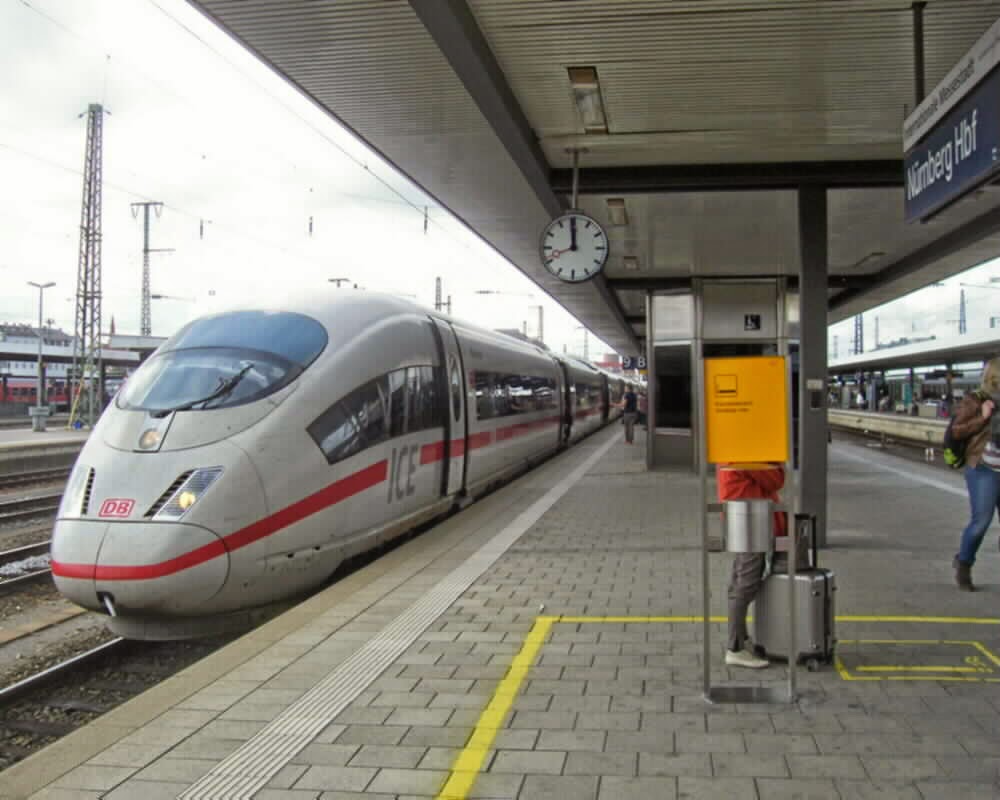 Thus, off to a good start.  There are probably more people changing from planes to trains at Frankfurt than take advantage of the opportunity in Milwaukee.  And I would like to have the opportunity to compare walking times and distances from the perspective of a traveller with only carry-on baggage, not obligated to clear passport control first.  That would likely shorten the trek at Frankfurt.  Heathrow: not sure.  One feels like one has hiked halfway to Land's End going from the platform for Terminal 2 (The Queen's Terminal, for international departures) to check-in at Terminal 2.

The contender for shortest walk from plane to train: South Bend.  It's an easier walk than from anywhere in O'Hare or Midway to the Chicago Transit Authority, and the interurbans have luggage racks, something missing on the L.  On the other hand, there are no international arrivals at South Bend to complicate the traffic flow.
Posted by Stephen Karlson at 12:31