We used to know how to build passenger trains in the United States.  But orders from Amtrak and from the local commuter rail agencies are infrequent and relatively small, in order that carbuilders accustomed to building freight cars in lots of several hundred or a few thousand can't take advantage of their experience.  Complicating things further: a "Buy American provision" (just another of the many constraints rent-seeking Democrats imposed on their non-stimulus stimulus) and reworked crashworthiness standards for passenger cars.

The stalled production undermines an ambitious plan to upgrade Amtrak service in California, Illinois, Michigan and Missouri and has highlighted the complexities foreign companies face in complying with made-in-the-U.S. requirements. Funding for about three-quarters of the 130-car order is tied to the American Recovery and Reinvestment Act of 2009.

To help U.S. manufacturers recover from the recession, the stimulus bill required the cars be built entirely in the U.S. with domestically sourced components and materials. The stimulus-funded cars must be completed by September 2017 and missing the deadline would result in any unspent money for the cars being redirected by the federal government.

That's affecting our neighbors, as the Japanese company, Nippon Sharyo, is building these cars (as well as commuter cars for Metra, and a few other projects) in a new plant along the Burlington at Rochelle.


Crashworthiness of passenger railcars has been a primary focus of car designers since collisions involving commuter and freight trains in Southern California killed 11 people in 2005 and 25 people in 2008. Nippon Sharyo’s car hasn’t been able to pass a federally mandated test for absorbing rear- and front-end compression force generated in a crash.

After repeated failures, engineers are now redesigning the car’s body shell. That and additional testing will take about two more years to complete, according to people familiar with the matter. The entire job was to be finished in 2018, with the stimulus-funded portion due for completion in 2017. Now, Nippon Sharyo isn’t expected to start production until 2018, people familiar with the work say.

The issue isn't crashworthiness per se, it's coming up with crashworthiness of a car capable of hauling more passengers (thus lower cost per seat) in a train that can still be handled with one locomotive at reasonable fuel economy.  We know how to build crashworthy coaches. 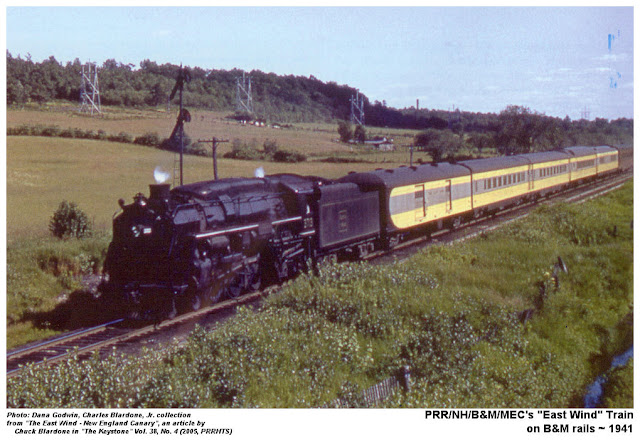 You could build a double-deck coach the way The Pennsylvania Railroad built those modified P70 arks (P70kr, to be precise), but you'd no more want to tie that much mass behind a diesel than you'd want to put a steamer, even as pretty as that Boston and Maine P4, in front.  Likewise for the baggage cars, and another newcomer to building stock has been having trouble with those.


Five years after winning a $343 million contract to build 130 long-distance railcars for Amtrak, Spain’s Construcciones & Auxiliar de Ferrocarriles SA is struggling to complete the order. The work was supposed to be completed by early 2015, but as of late last year the company’s CAF USA Inc. subsidiary had turned out 70 baggage carsfrom its plant in Elmira Heights, N.Y. Nearly 400 defects were identified in the first 28 baggage cars delivered, according to an Amtrak report issued in February.

The work schedule has been renegotiated, with each delay pushing delivery dates further out. CAF declined to comment.

Lack of experience in building railcars in the U.S. nearly disqualified Hyundai Rotem USA Corp., a subsidiary of Korea’s Hyundai Motor Group, from competing for a contract to supply 120 cars to Philadelphia’s public transit agency a decade ago. The company fell years behind schedule as its production was besieged by material shortages, design problems, software glitches, poor quality-control and difficulty finding skilled workers.

That "difficulty finding skilled workers" is a more general problem, thanks to forty years or so of failure by the common schools. No doubt, though, there were managers at Budd and Pullman and perhaps American Car who saw in the coming of Amtrak an opportunity to clear out the files, sell off the tooling, and fire or pension off more than a few tradesmen.

Moreover, we see now that "buy American" does not necessarily translate into "creates jobs."  To the extent that Nippon Sharyo or CAF or Hyundai choose not to bid on future contracts, the net result will be no work, and the existing trains will continue to depreciate.
Posted by Stephen Karlson at 14:37