UNDOING THE SHAMEFUL ACT OF VANDALISM.

New York's "redeveloped" Pennsylvania Station has been a dump since the day it opened, and New York's governor Andrew Cuomo has new hopes for a fresh start. "Overall space for passengers to circulate would be increased by 50%, creating a ‘holistic and interconnected world class station’ to be known as the Empire Station Complex."  There's nothing like "holistic, interconnected, world class" to activate the jive detector.  But the dump needs work.


Today Penn Station handles around 650,000 passengers, far in excess of a design capacity of 200,000 when the current concourse arrangement was laid out in the 1960s. This saw the original buildings and façade demolished to create room for the Madison Square Garden arena to sit over the station.

The current layout dates from the low ebb of intercity passenger rail, with the expectation that most of the traffic would be commuters who would use the station simply to get off trains before work and hustle onto trains after work, with perhaps a few coffee or beer stands as circumstances dictate. 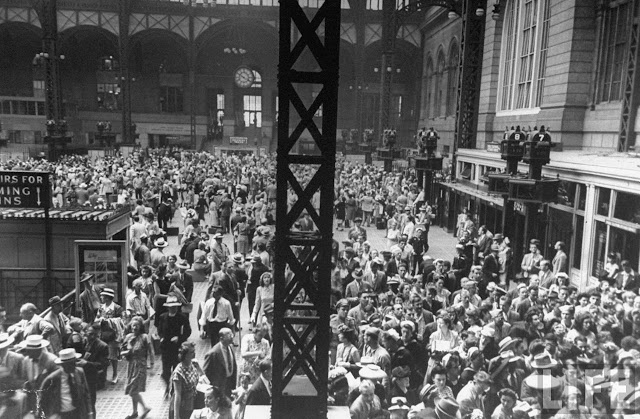 On the other hand, the latest plan hopes to "bring light and air into this underground purgatory."


A priority for the latest refurbishment is to ensure natural light can penetrate down to concourse and platform level. Other objectives include widening of existing corridors, reconfiguring existing ticket offices, improving access to and from street level and simplifying navigation around the station, which is served by NJ Transit and MTA Long Island Rail Road commuter rail services and six Subway lines as well as Amtrak’s long-distance trains.

The refurbished Penn concourse would be linked by a series of corridors, lifts and elevators to the Farley building. Preparatory works on the Farley site have already begun, with the lower concourse and walking routes to the Subway due for completion later this year. Cuomo also reported that state and federal environmental approval had already been secured for the rest of the work on the building. It is envisaged that the Farley extension would open before work starts to refurbish Penn itself in order to minimise disruption.

It's always going to be difficult to simplify pedestrian navigation, with track level necessarily far below street level in order for the trains to be able to dive under the rivers.  That, however, made for some dramatic vistas in the original station. 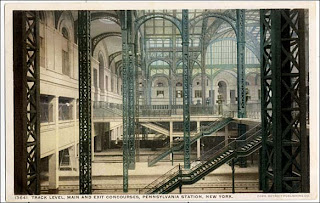 And refurbishment in phases will be easier with additional passenger capacity.  The mid-1960s redevelopment involved closing sections of the station, removing them, installing the new structure, and opening it.  This concourse area remained in operation almost continuously, with framing for the Madison Square Garden going in a piece at a time, and the upper works cut away after the framing was finished.
Posted by Stephen Karlson at 17:46