The ten most recent episodes of History Channel Vikings underwhelmed.  That is a rant for another day, though.  Today, Book Review No. 3 will consider Jonathan Clements's A Brief History of the Vikings: The Last Pagans or the First Modern Europeans?  (Spoiler alert: a little of both, and neither.)  Mr Clements concentrates on material recorded in contemporary sagas and chronicles, so as to ground his story in something resembling sources.  Most of the action in the History Channel series takes place earlier: there being no mention of Ragnar Lothbrok, Rollo the duke of Normandy, or Lagertha, or of any shield-maidens.  We see references to the "Great Heathen Host" led by Ivar the Boneless, Halfdan the Wide-Grabber, and Ubbi in England around 870, with Alfred becoming king in 871, and paying danegeld.  Harald Fairhair was in fact spurned by a woman early in life, but he never became king of all the Norse lands.  Raven-Floki arrives in Iceland about the same time.  Iceland, however, doesn't require an adventurous sail across open ocean: rather, it is visible on warm early spring days from the Faeroe Islands.

I witnessed that phenomenon on a more prosaic cross-Lake Michigan cruise in May, 2014. 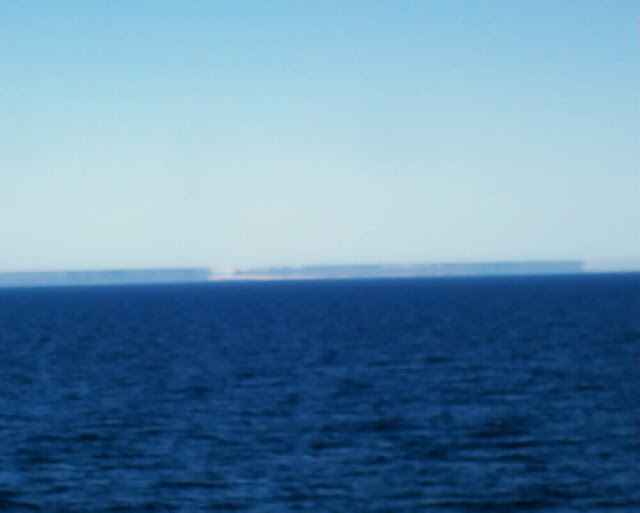 The sand-dunes in the neighborhood of Ludington aren't that tall, but with the right atmospheric conditions (the hillingar effect, p. 138) "objects on the ground can be refracted ... and distant lands may suddenly become visible, even though they are over the horizon."  Thus Iceland from the Faeroes, and on occasion, the Milwaukee light-house from Grand Haven.

The actual story, however, might not be the most exciting framework for a television series, although History Channel have managed to milk a treasure-hunt in the Maritimes and a quest for German exiles in Latin America for several seasons running.  Reality is more as I hinted at in the title: in most of Scandinavia, there's not much by way of arable land, and local custom was for adventurous young men to seek employ in the service of distant princes (Kievan Rus and Byzantium) or to rob, or perhaps to settle, in arable land elsewhere (British Isles, Normandy, ultimately Iceland, Greenland, and, until a previous warm period ended, the Canadian coast.)  That part of the History Channel story might be accurate, as once the Northmen found a place to farm, they'd farm it.  In addition, the Vikings offered the locals more favorable terms: pay us Danegeld, and we won't raid you.  The local sovereigns, however, would levy taxes and require each settlement to provide conscripts to fight the Vikings.  Thus, not surprisingly, the Norsemen and the local populations tended to engage in more friendly intercourse (in all the senses of that word) as well as, over time, accepting the tenets of Christianity.  Dealing with Native Americans was another matter, particularly as the ice pack returned, the supply ships from Norway came less frequently, and winter-hardened Inuit found their way into Labrador and Greenland.

We are, Mr Clements suggests, never more than one bad decade away from reverting to form  (Page 229).


If anything can be learned from more recent studies of history, it is the role that climate and ecology can play in population movements.  In the Viking Age and the centuries that preceded it, northern Europe's unpredictable climate periodically forced barbarian tribes to go in search of new resources.  In our supposedly enlightened age, the search for such resources has been sublimated, corporatized, sanitized perhaps, but it has not receded.  You did not, I hope, steal this book from someone else.  The clothes on your back were not snatched from Irish monks, and you did not appropriate your money by smashing up priceless holy relics, but there is still a perilously thin line that separates you from the hungry and the cold, and from the need to secure food and warmth.  Few of us are more than a few months away from bankruptcy.  We hand over new forms of manngjöld, hoping to shield ourselves against misfortune by paying tax and insurance.  Our faith in our governments and welfare systems keeps us from having to consider what we would do if they were not there.

While the Vikings are inhabitants of the past, the forces that created them are not.  Ours is still a world with famines, floods and incidents of overpopulation.  Our battles over resources are fought by proxy in distant lands, but they are still fought.  You do not lead a band of men to take from those less able to protect themselves, but somewhere far away, others do so on your behalf.  It takes only the tiniest turn of fate, the slightest lapse of law, to make Vikings of us all.

Methinks the man protesteth too much.  My tax dollars (one interpretation of manngjöld is a ransom; the other is "blood money" to buy off further honor killings) pay for a navy that keeps the sea-lanes open, hardly a fleet of commerce-raiders delivering the cheap stuff to me without the Chinese factories getting a cut.  And in the difference between the Northmen collecting danegeld and otherwise leaving the Angles and Saxons alone, and the local king levying taxes and conscripting men, we have the essence of the ongoing tussle to determine a governance structure that is symbiotic with, rather than parasitic on, other methods by which people cooperate.

(Cross-posted to 50 Book Challenge.)
Posted by Stephen Karlson at 15:44