THE NEW NEWS IS OLD NEWS.

Collaboration creates mediocrity.  Yes, that's long been a theme of mine. 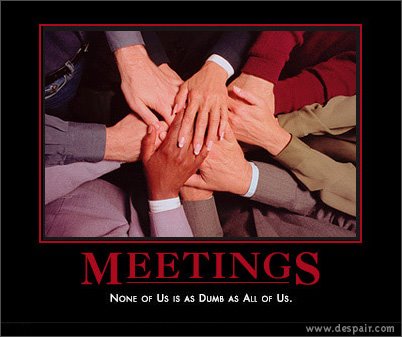 The poster may still be available from Despair, Inc.  But let's have Inc.'s Geoffrey James elaborate.


In previous columns, I've pointed out that open-plan offices, with all their interruptions, distractions, and noise pollution, are productivity sinkholes. I've also pointed out that collaboration tends to penalize the competent who end up doing most of the work.

A recent study published in Applied Psychology has now confirmed that a collaborative work environment can make top performers--the innovators and hard-workers--feel miserable and socially isolated.

The problem is that rather than seeing a top performer as a role models, mediocre employees tend to see them as threats, either to their own position in the company or to their own feelings of self-worth.

Rather than improving their own performance, mediocre employees socially isolate top performers, spread nasty rumors about them, and either sabotage, or attempt to steal credit for, the top performers' work. As the study put it: "Cooperative contexts proved socially disadvantageous for high performers."

This social isolation creates special difficulties for introverted employees who work in open-plan offices. While some extroverts seem to draw energy from a chaotic environment, introverts find such environments draining.

Sometimes the only way that introverts can get their work completed is to work from home, creating even more potential social isolation. Indeed, top performers who work from home are natural and easy target for workplace gossip and backbiting.

Unless checked, this tendency can result in an exodus of top talent.

There are a number of "unless checked" phenomena to explore in that passage.  My formulation for "penalize the competent" takes the form "punished for being cooperative."  The challenge, whether we are considering an academic, corporate, or other bureaucratic environment, is in coming up with the right set of incentives and rules by which people will take on the onerous tasks properly, rather than doing them badly so as not to be assigned them again.  I note, further, that this collaboration talk might have been a way to get away from strict hierarchies, in which the incompetent insubordinate is fired (or confined to quarters) but when the superior is incompetent, it's the incompetent superior sabotaging or stealing the credit for the subordinate top performer.  And I haven't even touched the ways in which collaboration becomes a forum for straining at gnats.  (Mr James's column found via Joanne Jacobs.)
Posted by Stephen Karlson at 12:58