THE FATAL CONCEIT GOES TO HOGWARTS.

The American Interest's Ben Judah pens an interesting hypothesis.  "American liberals’ love for J.K. Rowling misses the profound British conservatism of her books."  That might refer to "conservatism" as in "respect for the way things are done."  But that's not the same thing as conservatism, in any meaningful sense of the word.


I had half-forgotten about Hogwarts until I went to Oxford—or up to Oxford, as they say, as if it was a cloud, or a magic castle on an outcrop. Only on the other side of the university Sorting Hat myself did I begin to realize that Harry Potter was in fact a Tory.

Few Americans realize this, but a lot of what reads like fantasy in J.K. Rowling is in fact the British class system with magic wands, house elves and the Order of the Phoenix.

The Hogwarts Express is instantly recognizable as the Flying Scotsman to the Queen’s Balmoral and the prize Highlands shooting estates. The Hogwarts Houses are the Oxford Colleges. Harry’s scholastic shopping trips to Diagon Alley (to get your owl and your magic wand) are so obviously the pricey ritual of stocking up for country boarding school. Platform 9¾ at Kings Cross is, surprise, surprise right next to Platform 10 that takes you “up” to Cambridge. And as for a game of Quidditch, it’s either cricket or the sui generis Eton Wall Game.

Even fewer Americans realize Young Potter is in fact, as I grew to realise, a Tory.

Yes, I, too, had the same impression upon getting invited to an academic conference at Oxford.  This mowing machine even looks like something you'd unleash on a Quidditch pitch, that is, unless you were making do with an intramural field at a directional state university (the horror!) 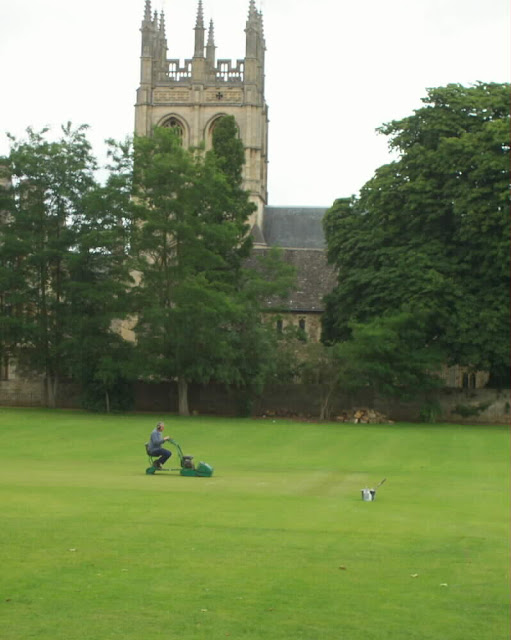 Not to quibble too much about the ferroequinology, but you go "up" to Cambridge on a "down" train, and the tourist-friendly entrance to No. 93/4 is in a location outside of the flow of commuter traffic, who are boarding electric multiple units for Peterboro or Cambridge. 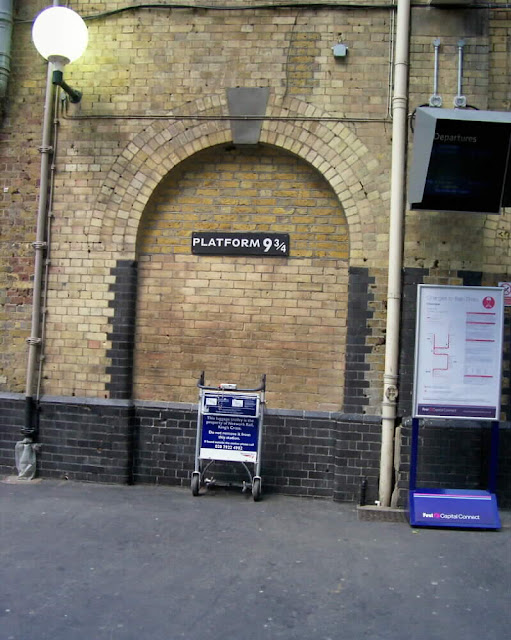 Somewhere, too, the ghost of Sir Nigel Gresley is cringing about the thought of his Doncaster racers being unavailable, such that the producers of the movies hired in Great Western's 5972 Olton Hall to run as Hogwarts Castle, to the great amusement of the devotees of things Great Western.

But it is what happens when you get to Hogwarts, er, to Cambridge where Mr Judah's metaphor gets too big for the loading gauge.


To me, perhaps the most blatantly Tory strain running through the Potterverse is the portrayal of Wizarding Whitehall. Nothing good can ever come of the Ministry of Magic, whose bureaucrats are badgering nincompoops with names like Cornelius Fudge and Pius Thicknesse, men who talk down to the befuddled Muggle Prime Minister, informing him how things are really run through a portrait and a fireplace in Number 10 Downing Street, like a voice of a Regency Palace emissary.

Not only are bureaucrats goofy and gluttonous, but every intervention by the Department of Mysteries and the Department for Magical Accidents and Catastrophes makes things worse. Problems, in Harry Potter’s world, can only be solved by the Wizards themselves—by the Tory Big Society of chipper public spirited Wizards. All that can be hoped for, even under Minister For Magic Hermione in J.K Rowling’s latest 2016 theatre spinoff Harry Potter And The Cursed Child is for government to be less corrupt. Magic will never come to the masses.

I don't know, sounds a lot like the importance of Governance By Wise Experts to me.  We're talking about the Cambridge of Maynard Keynes and Joan Robinson (sorry, that's my econ upbringing) and we might be talking about the Harvard of Franklin Roosevelt, McGeorge Bundy, Jack Kennedy, or Barack Obama, or the Yale of James Tobin and assorted Clintons.  The elder and younger Bushes, or Robert Bork, or Glenn "Insta Pundit" Reynolds?  We dare not speak their names.

Thus, for all Mr Judah's invocation of things Tory, it's really all about the rigged system.


Eton, Oxford, the Royal Family: as long as it was race-, gender- and orientation-blind, it could all carry on as before. The only problem is prejudice. There is no problem in structures.

Just as Eton-run Britain was fine as long as it was no longer sexist, homophobic or racist, Hogwarts-run Britain is fine too, as long as it makes the same journey. J.K. Rowling makes this explicit with the Obama-like Kingsley Shacklebolt as Minister of Magic at the end of the original seven books. Pureblood laws will be dismantled, but not the magical ruling class.

At the end of the day, Harry Potter is so truly a Tory because, like Cameron, he refuses to believe the ancient and venerable institutions that made him, bestowed him with magical powers, and allowed him to flounce into the Ministry of Magic at the drop of a hat could, in themselves, be inherently divisive and unfair. Is this a failure of intellect? Or a failure of empathy? The failure to see that that the lower middle class and mean-spirited Dursleys are that way because they live in a world without magic but full of mortgages?

The Toryism of J.K. Rowling, whose world repeats again and again its fierce belief in an elect, in ritual, in the rights of an elite so superior they must be educated far and away from the [c.q.] hoi polloi is what makes Harry Potter so oddly real, so British, and so urgent for children.

J.K. Rowling’s dark, almost reactionary, fairy tales reveal that in Britain the strings are pulled by an dazzling and hidden aristocracy. This is why I still love Harry Potter—as an enchanted adventure hiding a savage warning: Get into Oxbridge, the elite, or you’ll end up a muggle. In the same way that all fairy tales, from Cinderella to Little Red Riding Hood, contain within them brutal, terrifying lessons—don’t talk to strangers, run after the rich man at all costs—the secret of Harry Potter is that it does it, too. It is a magical mirror on the British class system.

In the United States version, that becomes,  Get into the Ivies, the elite, or you'll end up a deplorable, living in a world without illusions of good intentions, but full of student loans, high-priced mandatory purchases of health insurance, and mortgages.

Mr Judah, at the end, gets it.


One reading of millenial Harry Potter memes is that a certain reactionary Toryism is exactly what the #resistance is about: protecting the magic in Berkeley and Brooklyn from Voldemort, whilst offering nothing but a patronizing sigh for the muggles in Middle America. Not only unquestioningly trusting the Chamber of Secrets of the Dumbledores at the CIA on dark forces at work in Washington, but longing for wishful Avada Kedavras like the 25th Amendment to make it all go away. Magical thinking, in other words—not politics.

Yes, and the curricular authorities at Berkeley and in Hollywood, when they're not wishing for the 25th Amendment, even use their wishful thinking as a way of quashing the Oprah for President hype.  "Shouldn’t progressives be making the case for the virtues of government and collective action and, therefore, the importance of electing people of ability, experience, and expertise to high office?"

A little self-reflection about that social engineering vice might be in order, but whether at Hogwarts, one of the Cambridge or Oxford colleges, or among the Ivies and the state flagships, where studying the controversies and dealing with the world of underperforming student loans and toxic mortgages might be worth doing, it's apparently easier to deplorable-shame, than to understand, how the tragic vision might work.


Seth Cotlar, a professor of history at Willamette University in Oregon, isn’t a historian of conservatism (or a conservative). But around 2010, as the Tea Party raged, he felt increasingly alarmed by some students’ tendency to dismiss conservatives as ignorant racist who, in his paraphrasing, “just aren’t as smart as me yet.”

So he began teaching a course on the history of conservatism, to engage one small corner of the overwhelmingly liberal Willamette universe in informed political debate. Cotlar’s duty wasn’t to change minds, he said, just to open them to what conservatism actually is: “a politically robust, complicated phenomenon.”

It is the duty of the professor to open minds and free students to play with the ideas, without getting hurt. It might help, whether you're an historian at Willamette or a department head at Wisconsin, to get the differences between populism and conservatism.


Describing Trump as caffeine-crazed and hyperactive, rather than the “slow, steady hand” typically associated with conservatism, Cotlar said the president's rhetoric and policy positions not only defy conservative principles and political norms but also pose urgent pedagogical questions.

“How do we think about and engage with conservative Trump voters?” Cotlar asked. “What does it mean to empathize with people who advocate white nationalism?”

Perhaps most importantly, should undergraduates -- particularly those in groups marginalized by Trump -- still be asked to “understand empathically” an ideology he claims? Cotlar said no, adding that it was unethical.

Keep conflating white nationalism with conservatism. You won't like where that leads.  Now try reading Les Miserables without empathizing with a starving man stealing bread.  But there's nothing new about that sort of conflation, as Jay Nordlinger reported, fifteen years ago.  "Round my way, 'conservative' was something of a dirty word. It was an obscenity, really. It meant bigot, racist, ignoramus, exploiter, and other unpleasant things. There was always the vague — or sometimes not so vague — association with Nazism. The Left was the party of enlightenment, compassion, reason, and so on."  And still it is easier to wallow in those priors, than, oh, to take on the controversies.


Michelle Nickerson, an associate professor of history at Loyola University in Chicago, is currently updating her course on rebels and reformers in American history for next fall. In an attempt to address Trumpism, she said, she needs to make the notion of populism -- one that’s often cited to explain Trump’s appeal -- a bigger part of the course. In particular, Nickerson wants her students to understand how populism shapes conservatism.

That said, Nickerson said she needed to amend the common definition of populism -- resistance to dominance by the privilege [c.q.] elite on the right or left -- to include xenophobia, racism, conspiricism and a disdain for academic liberals and the media, among other traits.

Yes, invoking various made up thought crimes so as to discredit the critics, rather than, oh, engaging the root causes of Trumpian populism, is surely in the spirit of scholarly inquiry.  Thus, you too, dear history major at Loyola, can become part of the Wizarding World of Social Engineers and Enlightened People.
Posted by Stephen Karlson at 16:45