THE LIMITS OF A TOURIST ECONOMY?

The Michigan tourism bureau sell the recreational life under the Pure Michigan banner.  Not surprisingly, the emphasis is on the waters or the winter sports or the piney woods, not so much on the Rust Belt or Jackson Prison.  And the emphasis on tourism, particularly of the upscale variety, is evident in the infrastructure.

Here's the entrance to Ludington Harbor, in August 1982. 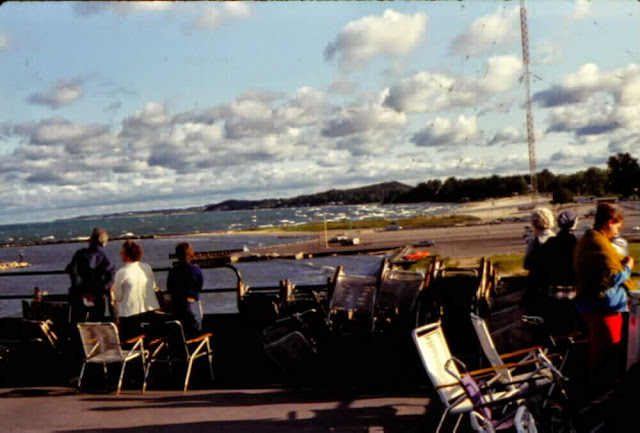 In the next thirty years, the use of beachfront real estate has changed.  May 23 was a good day for a lake cruise, although a winter jacket was handy on the fore-deck. 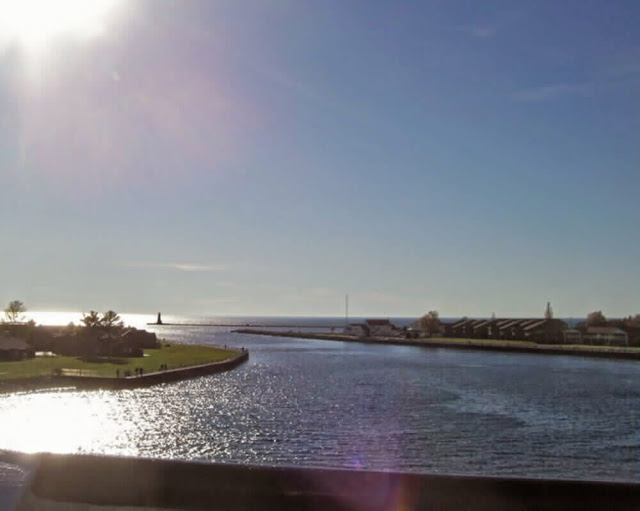 The photo platform is the same, onetime Chesapeake and Ohio car-ferry Badger.  (There are candids from this trip in the June archives, from Muskegon.)

Sister car-ferry Spartan has served as a source of parts (you don't go to NAPA for Skinner Unaflow engine components) since probably 1970.  But in 1982, the dock area was obviously a (now less-used) railroad yard. 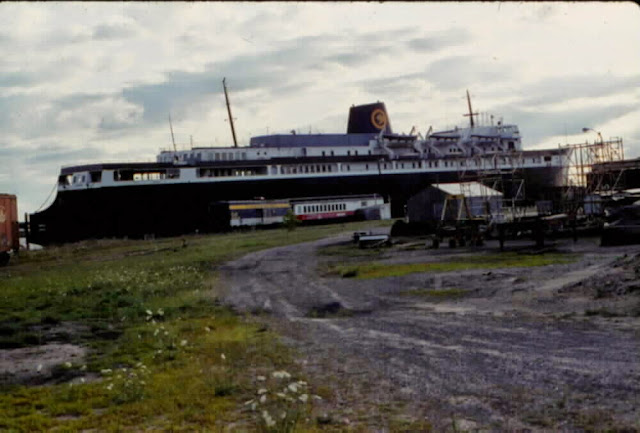 Spartan is still in the same place, but gentrification encroaches. 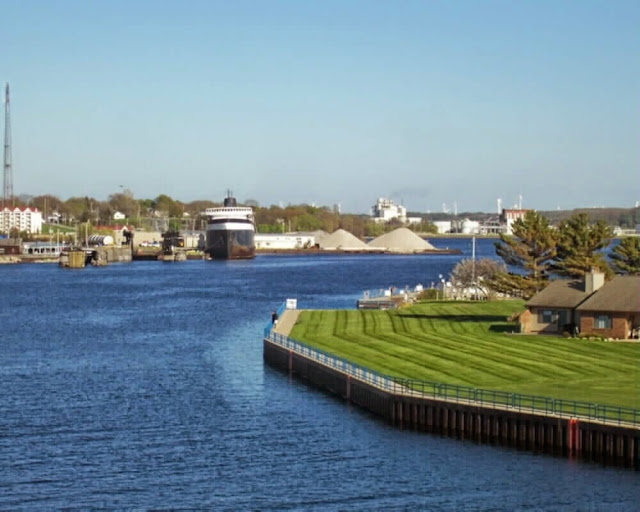 The three slips were once home to City of Midland 41, which was cut down for a barge some years ago.  (The reinforced lower hull of car-ferries makes them attractive candidates for such reuse.) 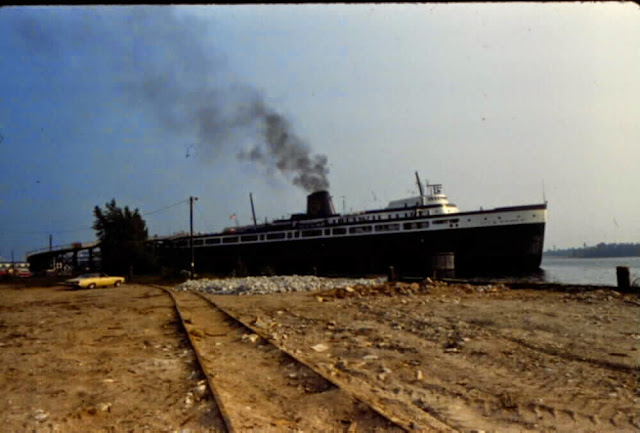 That's from a crossing I made in July of 1983.  Today, Badger has to dodge a lot of yachts on its way to the lake. 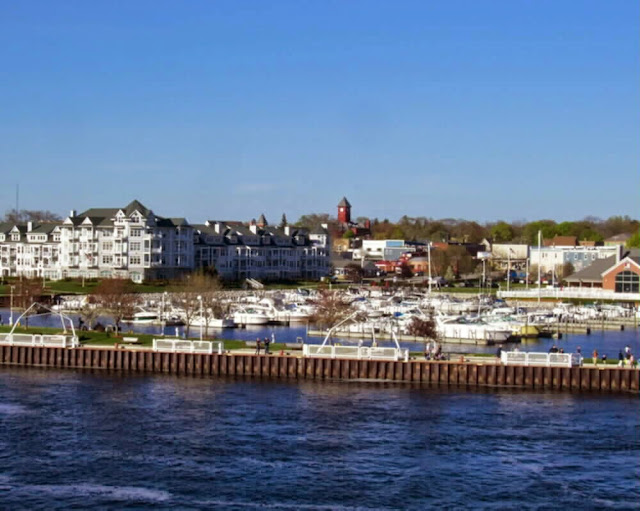 Those probably aren't the weekend toys of United Auto Workers members any more.  What remains of the old Ludington downtown is at the center and right of the picture.  By the looks of the stores and the commercial activity therein (it's along the main highway to the interior of the mitten) the residents of the condos and beach houses schlep their provisions in from elsewhere.

The downtown of Manistee is a commercial strip with the expected taverns and craft shops, as well as clothing and book dealers.  There is a river walk along the south bank of the Manistee River, and several of the taverns offer outdoor service. 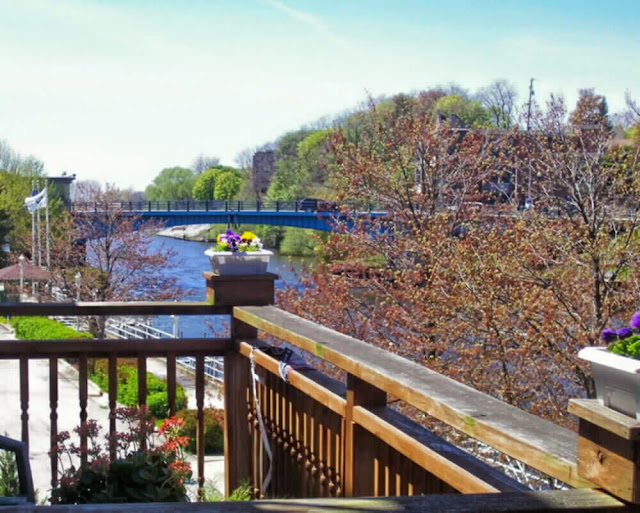 But on the west shore of Manistee Lake, one of several natural harbors well inland from Lake Michigan on the Michigan side, a townhouse development encounters a reality check. 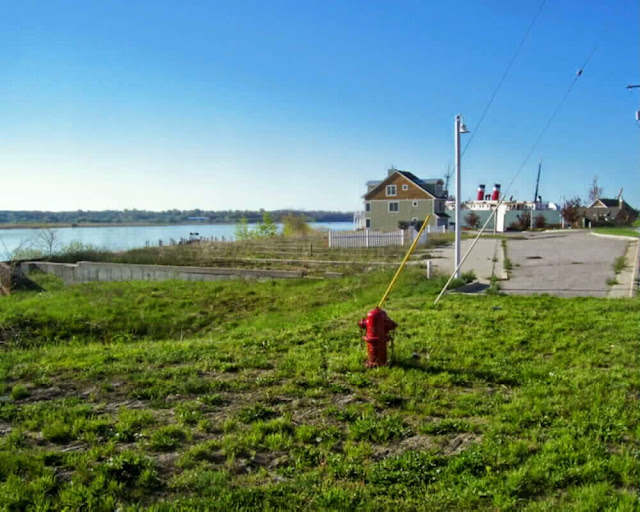 That's a preserved Grand Trunk car-ferry, City of Milwaukee, in the background.  Guided tours are available at weekends during the summer. 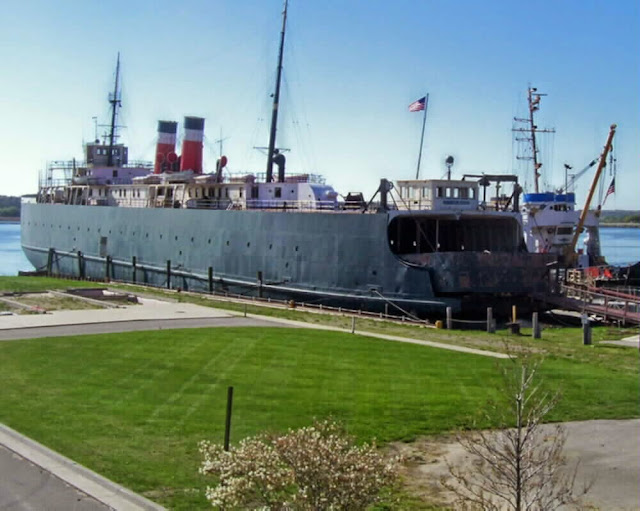 Because Grand Trunk never offered scheduled passenger service, there was no reason to upgrade the interior to go after passenger traffic. 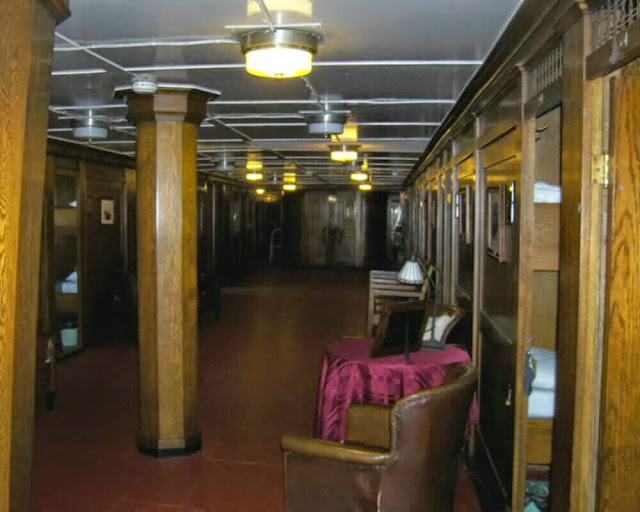 But across the highway from the ferry museum, which also offers tours of retired Coast Guard cutter Acacia, a motel is for sale. 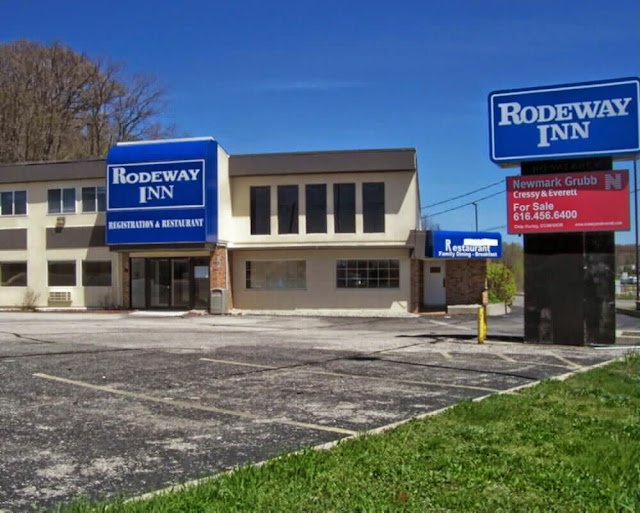 And the tough economy in Michigan ... tourism having not fully compensated for the self-immolation of the Big Three, means there may be an opportunity to buy a State Patrol post. 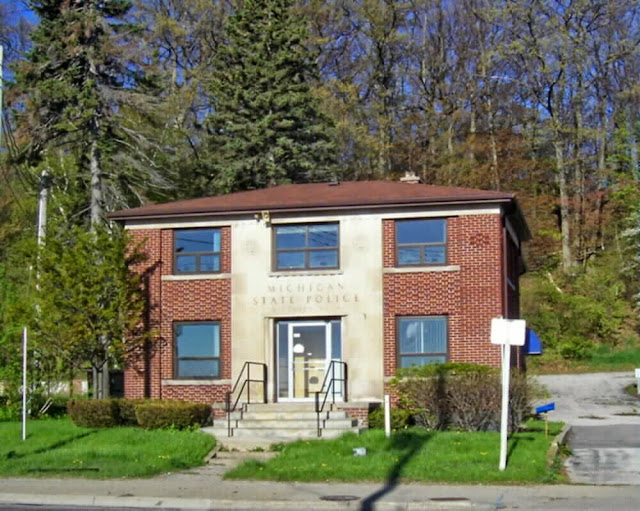 To the south, Muskegon features a reconfigured downtown, with rebuilt streets and a lot of vacant commercial buildings.  There's an ice cream stand along the road to the Milwaukee Clipper museum that offers a good variety of treats, and does a good business with the locals.  Grand Trunk didn't bother going after the passenger traffic on its Muskegon - Milwaukee run, because Clipper did that. 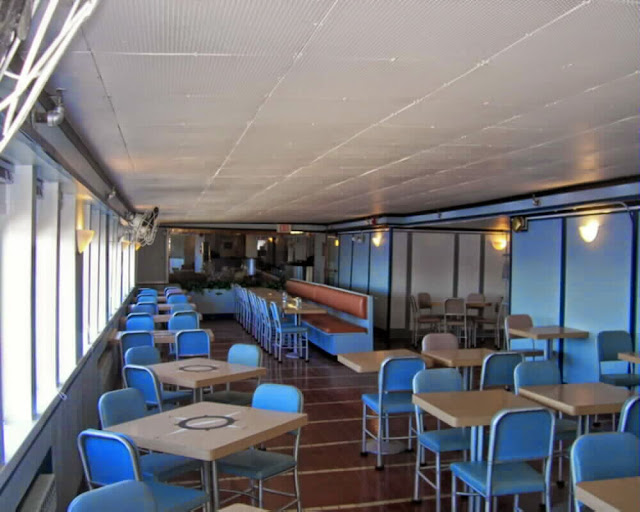 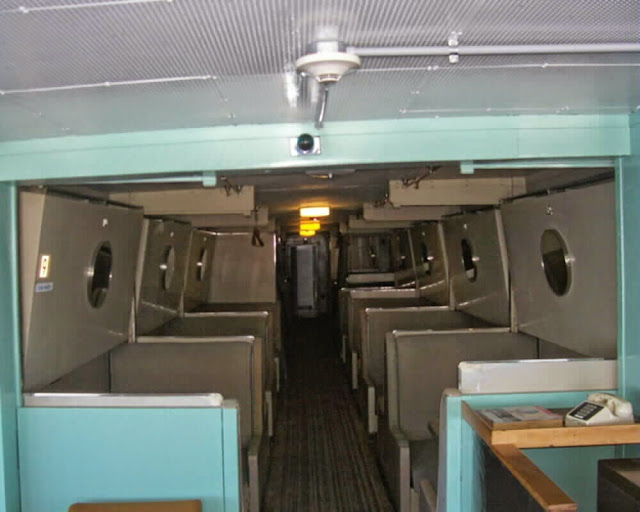 In preservation, Clipper occupies the former Grand Trunk docks.  Tourist Michigan has not yet expanded into its neighborhood. 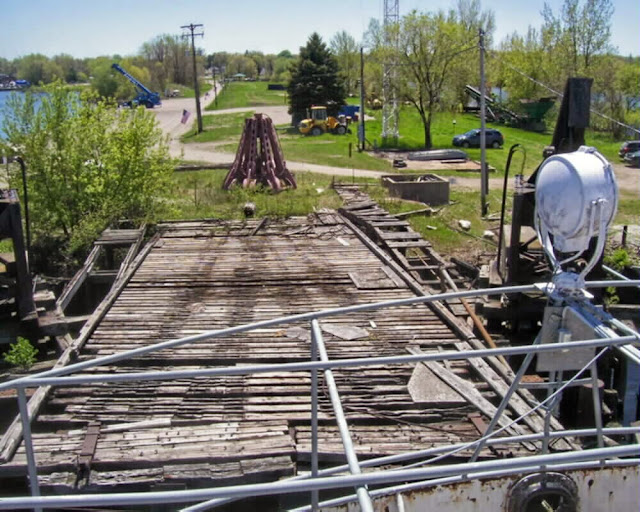 Muskegon's harbor, however, is another of those sheltered anchorages, and the Lake Express has about ten minutes of inner-harbor maneuvering before it can go all ahead flank to Milwaukee. 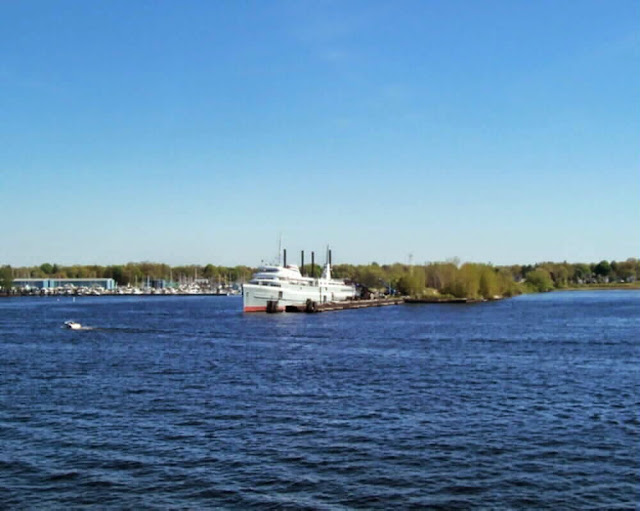 That's Clipper all by its lonesome.  The channel narrows, though, and the upscale properties are close to Silversides, a preserved submarine. 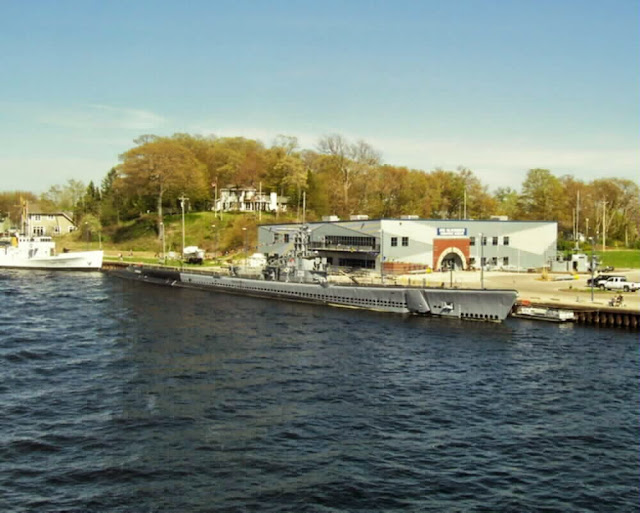 Then it's time to hustle west to Milwaukee.
Posted by Stephen Karlson at 22:10