The conventional wisdom, at least among athletic supporters, is that the sports program is the front porch of the university.  At Northern Illinois, that means a sagging football program, a rising women's basketball team, and a volleyball squad going to the national tournament.  (Last night's volleyball selection show gave, as is often the case, extended time to the top four seeds: Nebraska, Minnesota, Wisconsin, Texas.  Most of the national titles in the past few years have been won by Nebraska, Texas, Penn State, and Stanford.  Power rule?  Privilege?  Paging Harrison Bergeron ...)

But without a proper honors program, there's no institution of higher education.  Extending: algebra is a civil right. 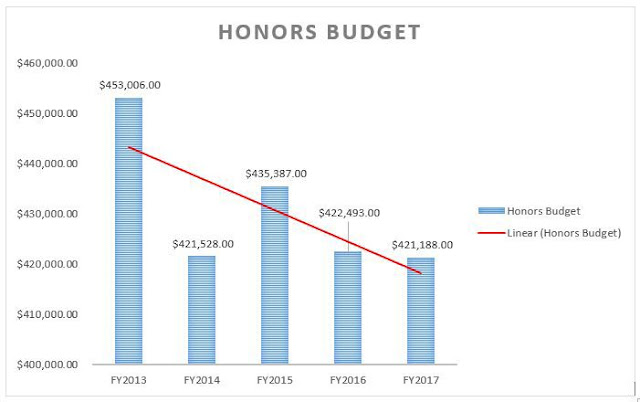 There have been four honors program directors in the past five years.  Perhaps a messy management structure contributes to the turnover.  The director has to consult with a vice-provost to set up a meeting with the provost.  And Lowells speak only to Cabots, while Cabots speak but to God.


The Program Prioritization Administrative Task Force placed the program in the enhanced resources category, suggesting the program “has the potential to increase enrollment as well as improve the academic profile of the institution,” according to the task force report. The task force also acknowledged the inadequate funding allotted for the program.

Daniel Kempton, who works as the vice president for Academic Affairs at Franciscan University of Steubenville, served as NIU’s honors director from 2009 to 2011 and said he felt he did not receive the resources he needed.

During Kempton’s time at NIU as honors director, he established new programs and administration saw a rise in the number of students participating in the program. Kempton said despite achieving this, he still felt it was a challenge being heard.

“I think [NIU] was in a period already at that time where the competition for resources was very intense, and I valued the honors program [so much] that I thought that it would receive resources more readily than it did,” Kempton said. “I did think we had a supportive administration at the time, [but] it was challenging.”

What was I saying, before I quit, about the deleterious effects of discouraging people of ability?
Posted by Stephen Karlson at 14:48