THE NEW, THE OLD, AND THE SAFE COURSE. Although I have reported on the Elburn extension previously, here are the first pictures. These date from my Milwaukee trip at the beginning of Spring Break. Very little had changed today, when I made a trip to Chicago for the Midwest Economics Association.

The Elburn coach yard is now the terminal for all trains, including a few weekday trips that load their first passengers at West Chicago. (There are no interlockings between West Chicago and Elmhurst, precluding the onslaught of zonal expresses the Burlington unleashes.) 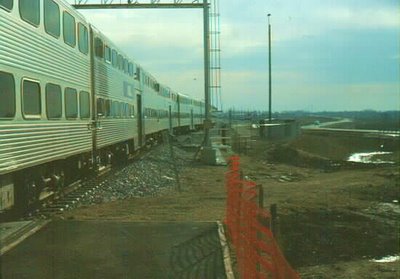 The Elburn station has only one platform, on the south side of the tracks. Here is the empty stock for the 8.25 Saturday departure backing into the station.

The Union Pacific Metra operation won a safety award. This polished locomotive bell is on display in front of the station master's office at North Western Station. 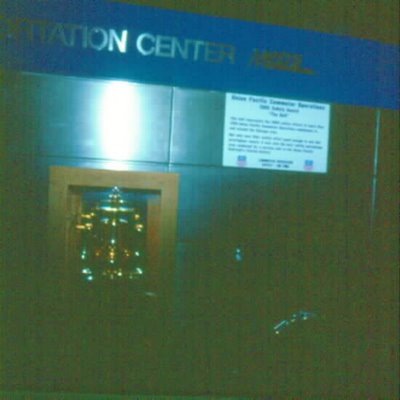 This bell represents the 2005 safety efforts of more than 1200 Union Pacific Commuter Operations employees in and around the Chicago area.

Not only was their safety effort good enough to win this prestigious award, it was also the best safety percentage ever achieved for a service unit in the Union Pacific Railroad's storied history.

The North Western Station is now the atrium of an office tower. I believe Chase (the old Chase Manhattan combined with a Chicago banking house) now owns the upstairs. CORRECTED 26 MARCH ... The building is now the CITICORP CENTER. 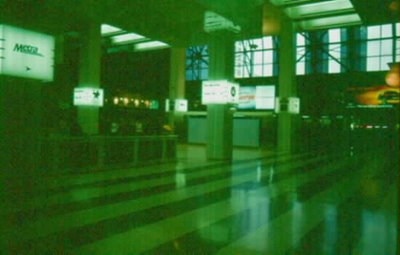 Get off the trains on the second floor, ride one of two escalator sets to street level, or spend your money in the various clothing stores on the first two levels first, or eat at the food court. (The food court is out of the line of traffic. Eating without getting trampled, what a concept.) It doesn't look much like a train hall, but there's more light coming in than is the case at Union Station just to the south.

Commuters can avoid some climbing by passing through the riverside entrance of the old Chicago Daily News building, walking up a ramp past some coffee shops, and emerging at track level. The passageway from the Daily News to North Western Station crosses Clinton Street, and the current owners of the building have thoughtfully left this link to the past in place. 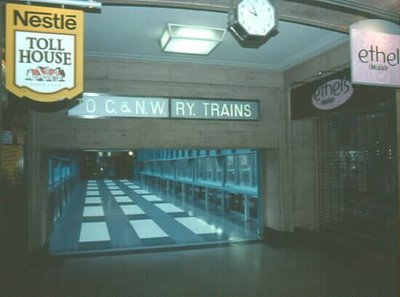 The North Western stopped being the operator of record in the early 1980s and merged into Union Pacific in mid-1995. Look for this sign in a museum eventually.

That's the end of the train riding for conferences for a while. (But I do have a weekend pass and my mental health could use a boost ...) The conference proved to be a productive one. There's an open bottle of Sprecher Winter Brew receiving the Wisconsin treatment as a reward.
Posted by Stephen Karlson at 22:30