SHE'LL LOOK BETTER IN RED. The Chicago Sun-Times discovers that getting into the University of Illinois is not easy.

Stacey Kostell, director of undergraduate admissions, acknowledged the school had gotten more competitive this year but said admission criteria haven't changed and that she still expects to accept close to two-thirds of students who apply. She said last year, the school saw an uncharacteristic decrease in applications; this year was closer to levels in the recent past.

"Students who had traditionally been admitted didn't always get admitted this year, not because they weren't good students, but because we had this very large increase without additional space, especially in the business program," said Kostell.

And although the school does plan to increase its nonresident enrollment in the future, she said that wasn't a factor in more residents getting denied. "We've had just as many upset out-of-state students call," she said.

Illinois admits applicants by college. A high school senior who declares an interest in the business college competes in a different pool of applicants from one who declares an interest in engineering who competes in ... I'm not sure I like that idea. Sorry for going Joshua Lawrence Chamberlain again, but one reason to attend college and deal with gen-eds is to get some sense of your strengths and weaknesses, which is why junior year is for declaring majors.

The young lady features in a sidebar about the calls the admissions committee at the College of Business made.

Allison Seymour and Brad Terry seem like students any college would want.

Seymour, 18, of Lincolnshire, had a 3.74 grade point average on a scale of 4.0, scored a 31 on her ACT college admission test, including a perfect math score, took six advanced placement courses, and played volleyball and ran track for four years. Terry, 17, of Buffalo Grove, had a 33 on the ACT and played varsity baseball. Both were student council members.

But both also were rejected by the University of Illinois College of Business this year. 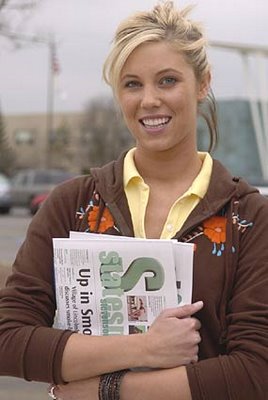 SIEVE!
Posted by Stephen Karlson at 00:12